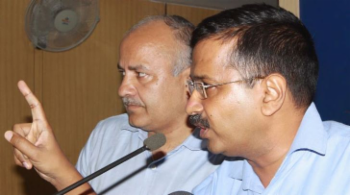 (15 Dec) Taking tensions between the Delhi government and the Centre to a new level, Chief Minister Arvind Kejriwal on Tuesday claimed that the Central Bureau of Investigation (CBI) raided his office at the behest of Prime Minister Narendra Modi. He also went as far as to call the Prime Minister a ‘coward and a psychopath.’ The central agency has registered a case against Rajendra Kumar for allegedly favouring a firm in getting contracts from Delhi government. A CBI spokesperson said, “The CBI has registered a case against Rajender Kumar, secretary to CM Delhi, on the allegation of abusing his official position by favouring a particular firm in the last few years in getting tenders from delhi government departments. After taking warrants, searches are being conducted in the office and residence of Rajendra Kumar.” CBI sources said the case was registered based on a complaint filed former Delhi Dialogue Commission member Ashish Joshi who has a running feud with Kejriwal. Joshi was one of the first few bureaucrats with whom Kejriwal picked up a battle after assuming office in Delhi.

The feud eventually saw an unceremonious exit of Joshi from the Delhi Dialogue Commission. CBI lying. My own office raided. Files of CM office are being looked into. Let Modi say which file he wants? – Arvind Kejriwal (@ArvindKejriwal) December 15, 2015 “I am the only CM who dismissed, on my own, a minister n a senior officer on charges of corruption and handed their cases to CBI. If CBI had any evidence against Rajender, why didn’t they share it wid me? I wud hv acted against him,” Kejriwal wrote on Twitter. The raid could potentially be the latest flash-point in what has been a highly troublesome and tumultous relationship between the AAP government and the BJP-ruled Centre ever since Kejriwal assumed power. Explained: Last week, The Indian Express Kumar, the most powerful bureaucrat in the capital, was questioned several times by the Anti-Corruption Branch of the Delhi government in connection with the 2002 CNG fitness scam case. Sources said Kumar denied any involvement in the case. Back in June, the Home Ministry was all set to initiate disciplinary action against Kumar for not relinquishing his position. Kumar had assumed the charge of home secretary after the city government shifted incumbent senior IAS officer Dharam Pal and placed him at the disposal of the Home Ministry following a tussle between the AAP government and Lt-Governor Najeeb Jung over the appointment of Mukesh Kumar Meena as chief of Anti-Corruption Branch. The government on its part has denied any involvement in the CBI raids.