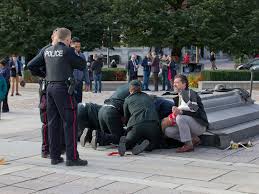 There is no evidence so far that a gunman who attacked Canada’s capital had links to Middle Eastern Islamist extremists, the government says.

Foreign Minister John Baird told the BBC that Michael Zehaf-Bibeau was “certainly radicalised” but not on a list of high-risk individuals.

Zehaf-Bibeau killed a soldier at Ottawa’s war memorial before being shot dead in the nearby parliament building.

Police have released video showing how the gunman stormed parliament.

It has also emerged that Prime Minister Stephen Harper hid in a cupboard in parliament for about 15 minutes during Wednesday’s attack as MPs sharpened flagpoles to use as spears against the gunman.

Mr Baird told the BBC there were no substantiated claims yet that Zehaf-Bibeau was associated with Islamic State.

Canadian Foreign Minister John Baird: “I haven’t heard… he was associated to Isil”

Mr Baird said he was “tremendously concerned about the number of Canadians who are radicalised and are fighting in Syria or Iraq, but we don’t have any evidence to link the two at this stage”.

“Reports suggest that well in excess of 100 Canadians have gone to fight jihad in the Middle East and that’s a huge concern.”

Mr Baird also said Zehaf-Bibeau could have done much more damage than he did.

“For several minutes it was complete horror, complete terror, we didn’t know whether the door was going to be kicked in, whether there was one or a group of people.”

Daniel Lang, chairman of the Senate national defence and security committee, told the BBC: “It was an ordeal I would not recommend anybody endure – there was just a wall’s difference between where we were and where they were.”

He said the incident had “shown our vulnerability and the reality that life here has changed dramatically”.

Mr Lang said most parliamentarians had been calling for greater security and “this event proves there should be”.

The BBC’s Barbara Plett Usher also spoke to men at the homeless shelter in Ottawa where the gunmen had been staying.

One said: “He never said a lot about his history or family. He never talked about anything that would make you suspicious.”

More details have emerged of the attack.

One source told the Globe and Mail that MPs had flanked the doors of their meeting room, preparing to attack the gunman with sharpened flagpoles.

“These guys were up there holding these spears ready to impale anyone who came in,” the source said.

Mr Harper was placed in a cupboard – described as little more than a “cubbyhole” in the Centre Block after the gunfire rang out, the report said.

The Globe and Mail’s source said many MPs had no idea the prime minister was still in the building.

“Someone knew there was a closet there so they stuck him in there. So for a lot of people it was as though he was gone.”

The prime minister’s security the detail came to rescue him.

The gunman is first shown hijacking a minister’s car, then speeding off towards Centre Block, pursued by police.

At Centre Block he left the stolen car and ran into the building, exchanging gunfire with House of Commons security forces and Royal Canadian Mounted Police (RCMP) officers.

He was ultimately shot dead by Sergeant-at-Arms Kevin Vickers, a former senior RCMP officer, who received a standing ovation in parliament on Thursday when he resumed his duties.

Zehaf-Bibeau’s mother, Susan Bibeau, told AP she had lunch with her son last week – their first meeting in five years.

She said her son seemed lost and “did not fit in”.

“Can you ever explain something like this?” she said. “We are sorry.”

At a news conference on Thursday, RCMP Commissioner Bob Paulson said Zehaf-Bibeau was not linked to the Muslim convert who on Monday killed a Canadian soldier in Quebec in a hit-and-run attack.

However, Zehaf-Bibeau was trying to get a passport to travel to Syria.

Mr Paulson said: “I think the passport figured prominently in his motives.