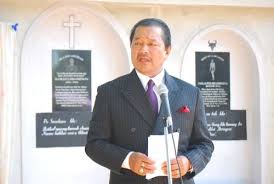 Mizoram Chief Minister Lal Thanhawla today said he was against ‘racism’ in any form.

Addressing a meeting of the Former Legislators Association of Mizoram (FLAM) on its 20th anniversary, Thanhawla said sometimes he wondered whether the people from north-east were being “accepted” as Indians or not.

The chief minister had earlier expressed opinion that the Centre should legislate an anti-racism law to prevent recurrence of recent incidents of attacks against the north eastern people in Bangalore and Delhi.

He said that border dispute between Mizoram and neighbouring Assam was a vexed problem.

He said that the state government continued to urge the Centre to constitute Boundary Commission to find amicable solution to the border disputes in the region.