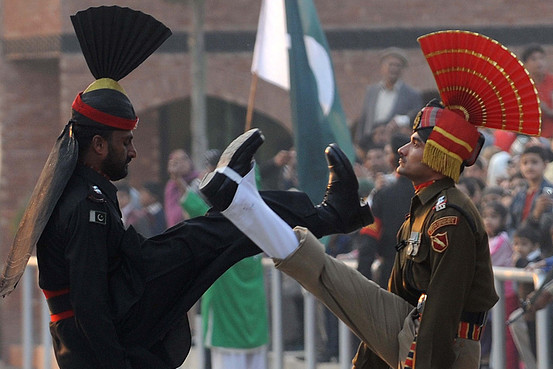 Pakistani rulers believe ‘when in trouble talk about Kashmir issue”

New Delhi, Oct. 14 (ANI): There has been a lot of debate in India as to why Pakistan has intensified the attack on the villages along the Line of Control and the International Border during the last few months, in spite of the efforts of Prime Minister of India Narendra Modi to improve relations with neighbours, whom he invited for his swearing in ceremony.

If one looks back, it is reasonable to assume that whenever there is internal trouble in Pakistan, the rulers there believe that by activating the tension with India they have better chances of surviving in their country. The best way to intensify hostility towards India is rake up the Kashmir issue.

Pakistan has waged three wars against India in 1947-48, in 1965 and in 1971. It suffered defeat in all the three wars. The worst was in 1971, when East Pakistan became an independent country and 93,000 Pakistani troops surrendered to the Indian Army. Following the Simla Agreement, India agreed to return the prisoners as well as the captured territories. It was agreed that the cease-fire line in Jammu and Kashmir will be known as the Line of Control and disputes would be settled bilaterally. One expected that peace would return to the sub-continent.

Having failed to win wars against India, Pakistan tried to wage proxy wars. Efforts were made to promote insurgency in Punjab and Jammu and Kashmir in the late eighties and early nineties, but failed.

Indian Prime Ministers, particularly, Inder Kumar Gujral and Atal Behari Vajpayee, tried their best to improve relations with Pakistan. Atal Behari Vajpayee went on a bus ride to Lahore and participated in a flag hoisting ceremony there. But Pakistan Army, under General Musharraf, had already prepared to occupy areas along the Line of Control in Kargil.

The Indian Army cleared the Kargil heights in 1999 but suffered many casualties. There was an uneasy peace between India and Pakistan, following attacks on Indian Parliament in 2001.

India, under UPA Government during the last decade tried to improve relations with Pakistan. It restarted the dialogue with Pakistan, but nothing fruitful could emerge as General Musharraf himself came under a cloud following the assassination of Benazir Bhutto during the election campaign.

One expected that things would improve when Narendra Modi was elected with a clear majority to be Prime Minister of India. He invited all neighbours, including Nawaz Sharif, to be guests at his swearing in ceremony.

But soon things changed in Pakistan. Nawaz Sharif has been under pressure when demonstration erupted against him, led by Imran Khan and Pakistani-Canadian cleric-Tahir-ul-Qadri. It looks as if the Pakistan army has found it necessary to initiate hostilities along the India- Pakistan international border and the Line of Control.

Pakistan Prime Minister Nawaz Sharif raised the issue in the United Nations but there was little response. Pakistan tried to increase tension along the Line of Control by attacking the villages along the LoC and the International Border. Unlike previous Governments, the BJP led government under Narendra Modi has given effective response to Pakistani attacks.

The latest development is that Pakistan has asked United Nations to ‘intervene’ in Jammu and Kashmir. What more, Pakistan has called the International Border a ‘Working Boundary’, indicating that it has claims to parts of India.

People have forgotten the history of Jammu and Kashmir. When India became independent, over 500 Princely states merged with India. Jammu and Kashmir, ruled by Maharaja Hari Singh, tried to work out a ‘Standstill Agreement’, but Pakistan was impatient and sent raiders in Army trucks.

When the raiders were on the outskirts of Srinagar, on October 26, 1947, Maharaja Hari Singh signed the instrument of Accession and Jammu and Kashmir became an integral part of India. Indian Army was flown in on October 27 to defend the State.

Instead of clearing the State from invading troops, Prime Minister Jawaharlal Nehru made the mistake of complaining to the United Nations about the invaders from Pakistan. A cease-fire came into effect on December 31, 1948.

By that time, Pakistan became an ally of the Western Powers, and hoped that it would be able to gain its objectives. But the UN resolutions which provided for ascertaining the will of the people wanted Pakistan to demilitarize while India was allowed to keep troops required to maintain law and order in the State. Pakistan never agreed to implement the directives to demilitarize.

Meanwhile, the areas under Indian possession elected a Constituent Assembly for the State. Headed by Sheikh Abdullah, the Government enacted a constitution for the State and provisions of Article 370 ensure that this has also the sanction of the Indian Constitution.