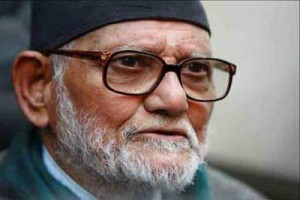 (27 Nov) Birgunj : The Nepali Congress headed by former prime minister Sushil Koirala is believed to join hands with the Madhesi Morcha, which has been protesting against the newly adopted Constitution. Sources close to Nepalese Congress leaders believe that staying away from the Madhesis would not help the party in the elections. While speaking to ANI, the sources from Nepali Congress said that Madhes region from southeast to southwest of Nepal is dominated by member of constitute assembly belonging to the Nepali Congress party. Nepali Congress party chief Koirala conceded defeat to UML chairman KP Sharma Oli, who was elected as the new Prime Minister in the recently held election. The growing protest and blockade at the Indo-Nepal border by Madhesi parties and protestors have cut down the supply line of Nepal which has hit the hilly areas as well as the Terai region. Nepal is facing a huge crisis of petroleum products due to the blockade at the borders. The attempt to import petroleum products from Nepal has not been successful in fulfilling the need of the government, said sources close to UML. Facing the crisis of basic amenities, the locals of the hill region have started raising voice against the existing communist government. The Nepali Congress party is forced to join the Madhes groups to sustain its politics in the country. Sources said that announcement of an alliance between Madhesi Morcha and the Congress would come in a week’s time. It can be a major setback for the ruling Communist Party of Nepal (Maoist) due to the anti-government sentiment among the people.