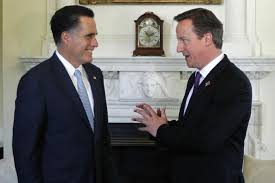 LONDON — Thursday was supposed to be the easy day, when Mitt Romney would audition as a world leader here by talking about his shared values with the heads of the United States’ friendliest ally.

Instead, the Republican presidential candidate insulted Britain as it welcomed the world for the Olympics by casting doubt on London’s readiness for the Games, which open Friday, saying that the preparations he had seen were “disconcerting” and that it is “hard to know just how well it will turn out.”

The comments drew a swift rebuke from Prime Minister David Cameron and, by day’s end, a public tongue-lashing by the city’s mayor as the Olympic torch arrived in Hyde Park.

“I hear there’s a guy called Mitt Romney who wants to know whether we’re ready,” Mayor Boris Johnson cried out to a crowd of at least 60,000. “He wants to know whether we’re ready. Are we ready? Are we ready? Yes, we are.”Cameron, responding to the candidate with a note of irritation, said that “of course it’s easier if you hold an Olympic Games in the middle of nowhere,” an apparent reference to Salt Lake City. That city held the 2002 Olympic Winter Games, which Romney organized. The prime minister and the mayor are conservatives, making their scolding all the more embarrassing for the candidate, an otherwise sympathetic ideological ally.

It was a difficult start to Romney’s first foray on the international stage as the presumptive Republican nominee, one that was supposed to present him to U.S. voters as a potential commander in chief. Beyond his Olympics remarks, Romney had a series of uncomfortable moments — some of them seemingly minor, but distractions nonetheless.

At one point, he told reporters about his previously undisclosed meeting with the head of the MI-6, Britain’s secret intelligence agency.

On the first official day of his six-day overseas tour, Romney declined to answer reporters’ questions about his foreign policy positions , saying he will avoid talking about any policy specifics while he is on foreign soil.

He ended the day in a scene that could prove damaging for a candidate sometimes labeled as out of touch. A dinner fundraiser, which raised $2 million, was co-hosted by executives at banks under investigation in London’s rate-fixing scandal.

For any candidate on a foreign trip, the margin for error is small, with every misstep magnified, fairly or not — especially so for Romney, whose visit is drawing inevitable comparisons to Barack Obama’s largely successful foreign tour as a candidate in 2008.

The notoriously harsh British media spewed out brutal headlines about what they almost uniformly deemed a bomb of a debut for Romney. The criticism reverberated across the Atlantic and into the United States, overshadowing a day in which Romney wanted to polish his diplomatic credentials, although his surrogates insisted that they were not worried about overseas coverage.

Olympics organizers have had to cope with a series of security blunders, including a disclosure that the private contractor hired to provide guards for the Games was 3,500 staff members short. The military scrambled to fill in the gap.

Still, the hosts did not seem to appreciate a foreign visitor reminding them about the problems. Romney voiced his doubts about the final preparations for the Olympics during an interview with NBC News’s Brian Williams, taped Wednesday as he began his trip.

Cameron responded by telling reporters on Thursday: “You’re going to see beyond doubt that Britain can deliver.”

He added: “We are holding an Olympic Games in one of the busiest, most active, bustling cities anywhere in the world.”

A headline Thursday on the Web site of the Guardian newspaper said, “Mitt Romney’s Olympics blunder stuns No. 10 and hands gift to Obama,” while the Telegraph published an opinion column with a sub-headline that read: “Mitt Romney is perhaps the only politician who could start a trip that was supposed to be a charm offensive by being utterly devoid of charm and mildly offensive.”

By Thursday, in back-to-back meetings with British officials, Romney was lavishing praise on London’s Olympics efforts. He said that “it is impossible for absolutely no mistakes to occur” at any Olympic Games. And in an appearance with Cameron in the formal White Room at 10 Downing St., he pronounced the Games “fabulous.”

“I was watching last night the torch relay coming across Great Britain and the stories about that, and the enthusiasm and passion,” he said. “And I love the theme, ‘Inspire a Generation.’ ”

Later, Romney told reporters, “My experience as an Olympic organizer is that there are always a few very small things that end up going not quite right in the first day or so. Those get ironed out and then when the Games themselves begin and the athletes take over, all the mistakes that the organizing committee — and I made a few — all of those are overwhelmed by the many things that the athletes carry out that capture the spirit of the Games.”

Romney passed on several opportunities to discuss his foreign policy proposals. He told reporters that he had spoken to British leaders about the global economy and the world’s hot spots — including Syria, Iran, Egypt and Afghanistan — but insisted that he would not describe his positions while traveling abroad.

Several hours later, Romney campaign aides hastily arranged a briefing for reporters with a campaign adviser who attended the meetings to provide a more substantive window into the talks.

The adviser, who spoke on the condition of anonymity, said that concern about the U.S. and British economies, coupled with fear of global fallout from the European debt crisis, consumed many of the meetings.

The leaders discussed recent developments in Syria and Iran, although Romney did not say how he would handle the crises because he did not want to “make his own foreign policy” while overseas, the adviser said.

Romney’s visit to Britain, where the country’s leaders boast of its long-standing “special relationship” with the United States, was expected to be a relatively easy stop, diplomatically speaking, on his foreign tour. From here, he will navigate more difficult terrain in Israel and Poland.

But in London, Romney hit a few other rough patches as well. During a morning press appearance with Ed Miliband, head of the opposition Labor Party, the candidate broke with typical protocol. While Miliband called on two British journalists to ask questions, which Romney answered, Romney did not call on any U.S. journalists.

While visiting with Foreign Secretary William Hague at the stately Foreign and Commonwealth Office, Romney also met with the leader of the MI-6, the intelligence agency. The meeting was not on Romney’s public schedule, but the candidate referred to it in his remarks to reporters, saying they “discussed Syria and the hope for a more peaceful future for that country.”

At the evening fundraiser, held at the five-star Mandarin Oriental hotel, Romney showed no signs that anything had gone awry. He mused about his heartstrings being tugged as he drove past a statue of former prime minister Winston Churchill — “with him larger than life, enormous heft of that sculpture suggesting the scale, and the grandeur and the greatness of the man” — and his interview with CNN’s Piers Morgan, who he noted “did a fine job.”

“It has been a marvelous day for us,” Romney said.