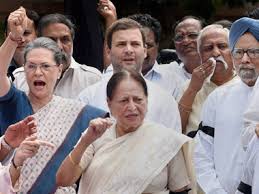 New Delhi, Aug 10 (PTI) As disruptions rocked the last week of Parliament’s Monsoon’s session, Government today singled out Congress chief Sonia Gandhi and her deputy Rahul Gandhi for stalling the House, saying not many of its leaders favoured it and accused them of using the row over Sushma Swaraj as a “pretext” to stop passage of the GST bill.

With Congress continuing to disrupt both the Houses seeking the resignation of Swaraj and two BJP chief ministers, Finance Minister Arun Jaitley ripped into its top leadership for its “stubbornness” and alleged that they wanted India’s growth story to suffer by obstructing the GST bill’s passage.

Citing a meeting called by Speaker Sumitra Mahajan today to break the logjam, Jaitley said Congress was the only party which opposed any debate and insisted that the House would not run while most opposition parties were for it to function.

“The assessment in the government is that there are not many in even Congress pushing this logic that House should not run. Only their top two leaders… have been stubborn on it.

(They say) Parliament should not function, legislations should not be passed. If there is harm to the country, to the system let it be,” the Leader of the Rajya Sabha told reporters.

Attacking Sonia Gandhi, Jaitley said her policies, which “inflicted” on the then UPA government, were “directly responsible” for slowing down the economy. Even when the UPA was in power, economic growth had ceased to be a priority for Congress, he said.

On the GST bill, he said, Congress was “completely isolated”.

“Its best endeavour is that since it won’t be able to stop the GST it is definitely trying to delay.”

Asked about Rahul Gandhi’s charge that Lalit Modi had paid money to External Affairs Minister Swaraj’s family and she should disclose the transactions, Jaitley said anybody can make such “unfounded” allegations. .