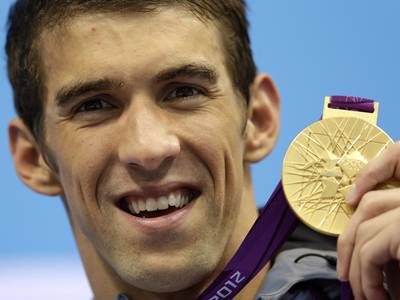 Baltimore (USA): Olympic swimming great Michael Phelps looked to the future, including the Rio Olympics in 2016, after he dodged a stint in prison for drunk driving.

The most decorated Olympian of all time struck a remorseful tone when he appeared in a Baltimore courtroom where he acknowledged the DUI charge against him. As his defense lawyer pleaded for leniency, it emerged that the 29-year-old is attending Alcoholics Anonymous sessions after completing 45 days of intensive rehab at the Meadows addiction treatment center in Arizona.

“During my 45-day program, I was able to find out a lot about myself that I never knew,” Phelps, in a dark suit and heavy-rimmed glasses, told Judge Nathan Braverman on Friday.

He added: “I’m looking at a much brighter future than I have had in the past.”

Phelps — still under a six-month suspension from competitive swimming — could have landed in prison for driving too fast after a few too many at Baltimore’s chic Horseshoe casino in the early hours of September 30.

But Braverman opted to heed a state prosecutor’s recommended penalty — a one-year suspended sentence, plus 18 months of supervised probation, during which Phelps must abstain totally from alcohol.

Phelps will be free to go outside the United States to train and compete, the judge said, but wherever he is he must stick firmly to his alcohol addiction treatment. “It sounds like you know what you need to do,” Braverman told Phelps, adding that he hoped the case would in time become “a footnote to a legendary career.”

Phelps was arrested for driving under the influence once before, when he was 19, in rural Maryland. His traffic record also included a 2006 speeding rap.

Friday’s outcome clears the way for Phelps — whose 22 Olympic medals include 18 golds — to resume his return to top-notch competitive swimming.

Due to the six-month suspension imposed by USA Swimming in the days after his arrest, Phelps will not be taking part in the 2015 world swimming championships in Russia, his attorney Steven Allen told the court. However, Phelps “is in the process of training for the upcoming Olympics” in Rio de Janeiro, said the lawyer, who gave no further details.