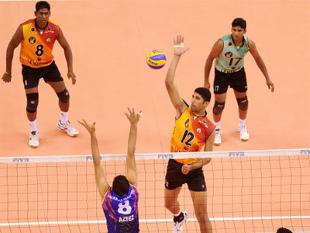 Indian men hardly broke a sweat as they thrashed unfancied Maldives 25-10 25-19 25-17 in exactly an hour to enter the quarterfinal of the Volleyball competition at the 17th Asian Games here today.

The male spikers had beaten Hong Kong in their first group league game and by virtue of two wins in the four-team group, find themselves earning a last eight berth.

India will play the formidable Iran (Asia No 2) in the final group league encounter. Iran are silver-medallists from the last edition in Guangzhou.

It was one of the easiest matches for India, who are ranked 37th in the world compared to a lowly 85th of Maldives.

Having rested their key spiker, the 6ft 9 inch Vaishnav, it was young Rajasthan boy Lovemeet Kataria, who played a major role in the Indian win.

The 21-year-old was a livewire on court with brilliant interceptions at net followed by innumerable number of killer spikes.

Such was India’s domination that libero Kanagaraj Sivasubramanium did not have much retrieving to do. Maldives certainly gave a better account of themselves as they were locked 4-4 in the beginning. However Indians played the key points well winning the game at 19.

In the third set, Maldives, for a brief period, led India 4-3 but the joy was shortlived as a flurry of spikes got the winners race to a 7-4 lead. Navjit served really well and also smashed well as India took a 20-12 lead before knocking off the remaining points in style.