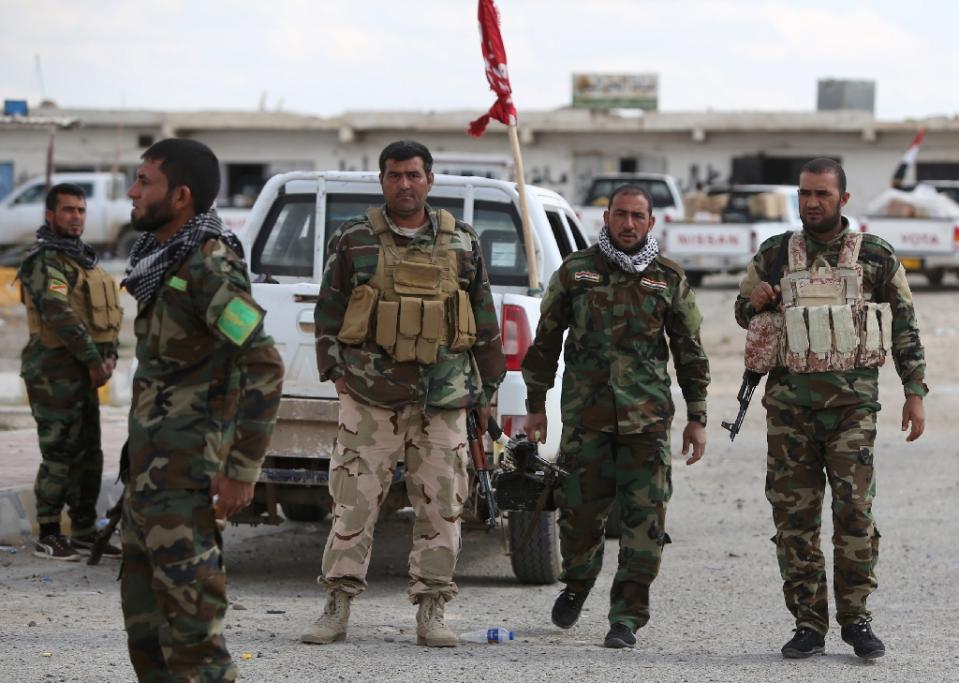 Washington had been reluctant to get directly involved in a battle in which Iran-backed militias have taken the lead but the Pentagon seemed keen to reassert itself as Baghdad’s chief partner in the war against the Islamic State group.

The US-backed air campaign against Shiite minority rebels in Yemen was announced by the Saudi ambassador in Washington and condemned by Tehran.

The operation to retake Tikrit was launched on March 2 but had failed to dislodge a relatively small number of IS fighters who have hemmed themselves in with thousands of bombs for a last stand in the city centre.

“The assault on the last (IS-held) pocket of Tikrit started from the southern front, in Awja,” said a brigadier general from the military headquarters in Salaheddin province, of which Tikrit is the capital.

The forces involved in the fighting include the volunteer Popular Mobilisation units, Shiite militia groups, the army’s counter-terrorism force as well as interior ministry units.

Iraqi air strikes had, by Baghdad’s own admission, not been efficient and accurate enough to break the back of IS resistance.

The exact number of civilians trapped inside Tikrit is unclear but a Red Crescent spokesman last week said “no more than 30,000, probably quite a bit less.”

Other countries in the 60-nation US-led coalition were taking part in the strikes but officials did not specify which ones.

Washington had expressed strong reservations over the leading role played in the Tikrit operation by Shiite militia groups, some of which have been accused of serious abuses.

Iran’s top commander in charge of external operations, Qassem Suleimani, has been ubiquitous on the Salaheddin front lines and is perceived by many Iraqis as the brain behind Iraq’s ground operations.

View galleryIraqi Shiite fighters from the Popular Mobilisation …
Iraqi Shiite fighters from the Popular Mobilisation units head towards the city of Tikrit on March 2 …
But at a briefing on Wednesday, Pentagon spokesman Colonel Steven Warren insisted Washington remained Baghdad’s most precious partner in the war to reclaim the vast regions of Iraq IS conquered last summer.

“Reliable, professional, advanced military capabilities are something that very clearly and very squarely reside with the coalition,” he said.

State Department spokesperson Jen Psaki also defended the coalition’s record in the effort to restore the sovereignty of Iraq, which looked on the brink of breakup nine months ago.

Close to 3,000 strikes have taken out “thousands of fighters, numerous commanders, nearly 1,500 vehicles and tanks, over 100 artillery and mortar positions, and nearly 3,400 fighting positions, training camps, and bunkers in Iraq and Syria,” she said.

Groups backed by Iran, which is not part of the coalition, have insisted they do not need US support and some have threatened to pull out of the Tikrit area if coalition strikes were called in.

Washington wants Iraq’s regular forces to be the main beneficiaries of its return to the Iraqi theatre, which it quit in 2011 after an eight-year occupation.

A US official told AFP that President Barack Obama approved the Tikrit air raids on the condition that Iraqi government forces be given a larger role in the assault.

It was the hometown of executed dictator Saddam Hussein, remnants of whose Baath party collaborated with IS last summer.

And it is seen by military commanders as a key stepping stone to recapturing Iraq’s second city Mosul, the jihadists’ largest hub.