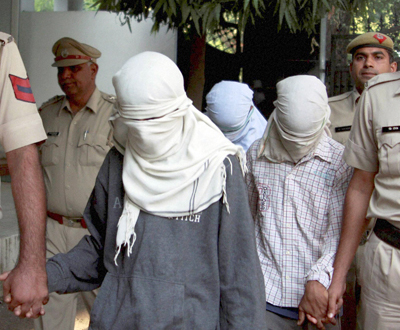 Three people were arrested Friday in connection with an attack here on two youths from Nagaland, police said.
Aloto Chishi alias Sukoy and Awana alias James, working in a call centre here, were injured when they were attacked Wednesday night in Sikanderpur area here near the Mehrauli border.
“Police arrested Gaurav Yadav alias Pony, 23, and his two tenants Ram Bihari and Vijay Kumar for attempt to murder,” Nazneen Bhasin, deputy commissioner of police (east), told reporters.
Bhasin, who is also chief nodal officer for crime against people from northeast region, said the victims live as tenants in the home of Yadav’s cousin.
“Nagaland youths Wednesday night had scuffle over some issue with Yadav but they reached a settlement. Gaurav invited Sukoy and James to have drinks in the room of his tenant.
“The youths were attacked when they refused to have more drinks and were held hostage for whole night,” she said.
Ram Bihari hails from Aligarh in Uttar Pradesh while Vijay Kumar is from Nadia district in West Bengal, the officer said. Both are in their 20s.
The arrested people were Friday presented in a court, which sent them to judicial custody.
The Naga youths – in the age group of 22 to 25 years – were admitted to a state-run hospital here. James was later shifted to a hospital in Delhi as his condition was stated to be critical.