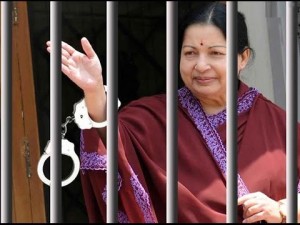 Bangalore, Oct 18:
It’s a festive mood at the residence of J Jayalalitha in Poes Garden.
Unmindful of the heavy downpour, thousands of AIADMK cadres have been waiting patiently since morning to see their leader Jayalalithaa, who is on her way from Bangalore after being released from the jail there.
The crowd seems to be increasing in number steadily since afternoon even as Jayalalithaa is expected to arrive at her residence at around 7 p.m., party workers gathered outside her residence said.
D Ramesh, a party functionary from Royapuram, said “I don’t want to leave this place without seeing her.”
A large number of women too have gathered at Poes Garden since morning on the hope that their leader will say a few words – usually from the balcony on major occasions.
Sources said that Jayalalithaa is expected to arrive in Chennai by a charter flight shortly and likely to head directly to her Poes Garden residence. It is, however, not clear whether she will visit the party headquarters, where supporters have been celebrating since morning.
It is also learnt that a human chain is likely to be formed by her right from the Chennai airport till her residence.
PTI reports:
AIADMK supremo J Jayalalithaa was today released from jail here after 21 days, a day after Supreme Court granted her bail in an 18-year-old disproportionate assets case.
Jayalalithaa stepped out of Parappana Agrahara Central Prison shortly after Special Court Judge John Michael D’ Cunha issued the release order.
Tamil Nadu Chief Minister O Pannerselvam, several ministers, MPs and legislators received her near the prison after which she headed to HAL airport to fly back to Chennai by a special flight.
Jayalalithaa had yesterday got a major relief when the Supreme Court granted her conditional bail and suspended the sentence of four years simple imprisonment given by the trial court in Bangalore in the 18-year-old illegal assets case.
Earlier, the release order by the Special Court came after a bond for Rs. two crore and surety on assets for more than Rs. one crore was furnished for Jayalalitha. Copy of the Supreme Court order was also produced by her lawyers.
Jayalalithaa’s close aide Sasikala and her relatives Sudhakaran and Elavarasi, who also fufilled similar conditions, also walked out of jail.
AIADMK supporters carrying Jayalalithaa’s photos and holding flowers broke into celebrations as her motorcade passed through the heavily guarded route from the prison.
Hundreds of policemen, including city armed reserve, were posted in and around the prison, with authorities clamping prohibitory orders anticipating huge flow of AIADMK supporters.
With the AIADMK chief enjoying ‘Z’ Plus category, police had stepped up security supervised by senior officials and barricaded the areas in and around the prison complex and blocked access one km away on the road leading to the prison.
Pannerselvam and his entourage had reached Bangalore in the morning.
At the Karnataka-Tamil Nadu border point on Hosur also, police and city armed reserve kept a close vigil and regulated the movement of vehicles from the neighbouring state into the city. The jail is located about 20 km from the Hosur point.
Groups of AIADMK supporters had gathered at Hosur entry point chanting slogans hailing their leader.
Jayalalithaa and three others had moved the Supreme Court after failing to get relief from the Karnataka High Court.