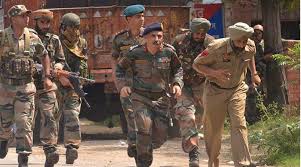 New Delhi: Linking the Gurdaspur attack to Pakistan, Home Minister Rajnath Singh on Thursday said the three terrorists had infiltrated from there to carry out the strike and asserted that the government will do everything possible to prevent cross-border terrorism.

Making a statement in Rajya Sabha on Monday’s attack in Punjab, he said “any effort by the enemies of our nation to undermine India’s territorial integrity and security or imperil the safety and security of our citizens will meet an effective and forceful response from our security forces.”

The government “has been and will remain resolute in this regard”, he said.

Singh made the statement amid din created by Congress members which was strongly disapproved of by Deputy Chairman PJ Kurien, who said it was “not politics” but a “statement on a terrorist attack” that concerns the security of the country.

However, as the unrelenting Congress members continued to shout slogans against Prime Minister Narendra Modi, Singh said, “I take this opportunity to assure the House that the government is firmly to root out terrorism from India.”

The Home Minister also assured the House that “the government will do everything possible to prevent cross-border terrorism aimed against India.”

Giving details of the attack in Punjab, he said, “preliminary analyses of GPS data indicates that the terrorists had infiltrated from Pakistan through the area near Tash in Gurdaspur district, where the Ravi river enters Pakistan.”

It is also suspected, he said, that the same terrorists had planted five IEDs (Improvised Explosive Devices) on the railway track near Talwandi village between Dinanagar and Jhakoladi which were subsequently defused by the bomb disposal squad. A night vision device was also recovered from the spot.

“The security forces in the border are alert but the difficult terrain coupled with recent heavy rains, resulting in excess flow in the rivers and canals along the border, could have been a factor, in this particular group sneaking into Punjab,” the Home Minister said.

He said that during the last one month, there were five attempts at cross-border infiltration in Jammu and Kashmir sector, out of which four were interdicted and eight terrorists neutralised.

In the remaining one instance, the terrorists went back after effective retaliation by the Indian forces.

Singh hailed Punjab Police for engaging the terorrists “effectively” and said all efforts were made to apprehend the attackers and prevent their escape besides avoiding any collateral damage.

The Army and NSG were placed on standby to support the Punjab Police opertions, he said, adding the Union Home Ministry monitored the situation closely and was in constant touch with the Punjab
government.

“In the end, all the three terrorists were neutralised in this successful operation,” Singh said and added with regret that Superintendent of Police (Detective) Baljeet Singh, “who was leading from front”, was martyred.

During the operation, the BSF and the Army were placed on high alert along the border, he said.
“I personally spoke to the Chief Minister of Punjab (Parkash Singh Badal) and assured him of all assistance from the central government,” Singh added.

While he spoke, the Congress members, carrying placards, were shouting slogans in the Well against the Prime Minister and his government over the terror attack.