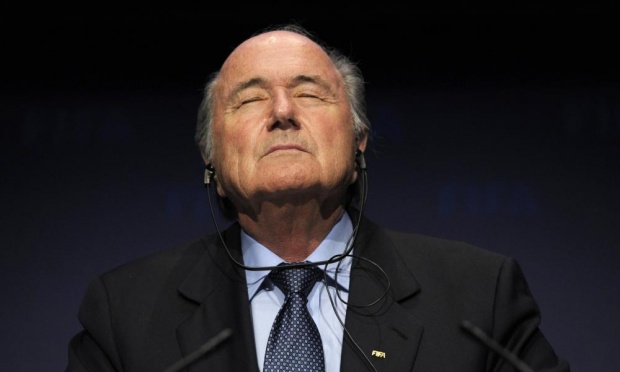 On Friday, Sepp Blatter stood before the 209 members of the “Fifa family” that have become his fiefdom and giddily beamed: “Let’s go Fifa! Let’s go!”

Just a few days later, he stood before a sparsely attended, hastily convened press conference in Fifa’s £150m HQ and gloomily announced he would step down, bringing down the curtain on four decades at world football’s scandal-hit governing body and 17 as president.

Less than a week ago, Blatter was touring the meetings of the various confederations in Zurich and appeared supremely confident of victory in an election that he had promised never to contest. On Wednesday morning at 6am, his world came crashing down as Swiss police raided the Baur au Lac hotel.

Sepp Blatter to resign as Fifa president after 17 years in role
Read more
Some of those close to him say that privately he was more concerned than he let on as rumours, fed by the networks of private investigators employed by Blatter and his rivals, swirled on the progress of the FBI investigation into alleged money laundering and tax evasion.

It is testament to his record of Machiavellian manoeuvring down the years that even as he delivered his shock resignation, senior figures in world football were starting to speculate on what his masterplan might be and whether he would work to shoehorn a favoured candidate into the role when he is replaced between December 2015 and March next year.

His closest advisers insisted that there was no single silver bullet that precipitated a change in mood from his bullish, predictable attacks on the British media and the US justice system on Saturday to the contrite, diminished figure standing on the dais on Tuesday.

They said that he had simply spent the weekend since a combative post-election press conference, at which he was forced to deny that he handled a $10m (£6.5m) bribe, being told by those closest to him that the walls were closing in and it was time to go.

In the face of a promise from US investigators that more indictments would follow and reading the scale and magnitude of the case being built up by the FBI and the US justice department, they say he finally listened.

In particular, his daughter Corinne is believed to have encouraged him to stand down.

Nor can he have been unaware of the fact that those closest to him over four decades at Fifa were being picked off one by one.

But something about that picture doesn’t quite ring true. Blatter has long been addicted to the power and prestige afforded him by his job and terrified of life beyond it.

US investigators have been cooperating with Swiss prosecutors for months and Blatter is sure to have been in their sights. He must have felt the noose tightening.

Existing in a bubble of private jets, five-star hotels and the endless, meaningless babble of Fifa – handshakes for peace, Nobel Foundation initiatives, Football for Hope and all – he clung on to power at all costs through a jaw-dropping succession of scandals revealed by dogged investigative reporters.

At times he appeared divorced from the reality of his organisation as the rest of the world sees it and the dark heart of corruption among its most senior figures, so vividly outlined last week in a Brooklyn address by the US attorney general, Loretta Lynch.

When he is not living the life of a head of state, Blatter has been salting away a salary never disclosed but which almost certainly totals more than $10m (£6.5m) a year.

To see the reasons for a dramatic U-turn in keeping with Blatter’s flair for the grand gesture, it is perhaps necessary to understand his desire to retain at least a modicum of control over the organisation he sees as his own.