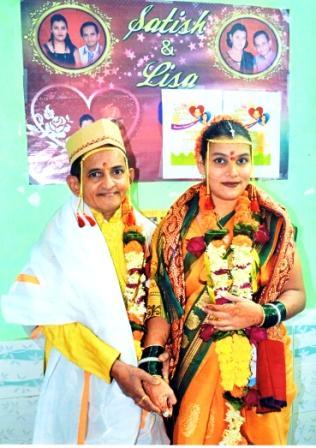 Selfie’ couple Satish Apte and Lisa Kapadiya’s marriage made news, in January this year, for their 39-year age difference.

Recently, the 59-year-old Apte filed a missing complaint of his wife, who left his home on March 31 but never returned. As Apte manages to make into news yet again, iamin tries to find out the other side of the story.

In an exclusive interview, Lisa’s sister Monica reveals that she was physically harassed by Apte. “Lisa was blackmailed into marrying Apte. As soon as they got married, he started to assault her physically. Looking at her apathy, I decided to take her to my home. It all started when she was only 8-year-old. She was molested by Apte then and we had filed a complaint with the Ramnagar Police Station in Dombivali. She is presently very disturbed,” Monica said.

Monica is set to take her sister Lisa to the Naupada police station and file a complaint against Apte. “Apte had helped our family when we were financially unstable. He is just taking advantage of that fact. We will fight against this torture,” said Monica.

Meanwhile, Apte rubbished all these allegations.