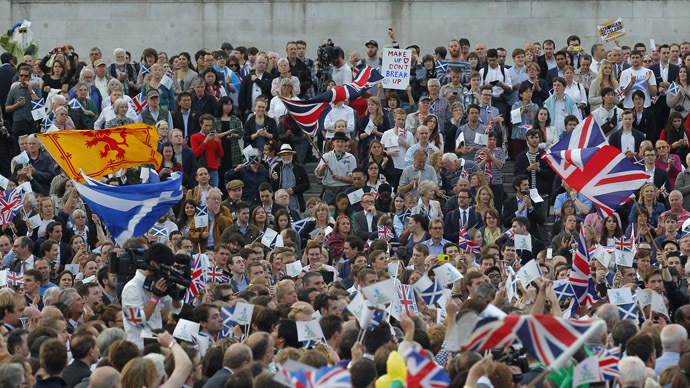 London- Britan is under 72 hours away from a once-in-a-lifetime vote on Scottish independence that could break up the 307-year-old United Kingdom, splitting apart one of America’s key global allies. With polls suggesting that a Scottish split from the rest of Britain is a real possibility, lawmakers including Prime Minister David Cameron are making urgent appeals to save Britain its biggest constitutional upheaval since the Wars of Independence that led to the creation of the United States.

What will be voted on?

More than 4.2 million people in Scotland — or 97 percent of the adult population — have registered to vote on whether or not to remain part of the United Kingdom.

Scotland was an independent country until 1707, when the Act of Union with England led to the creation of Great Britain and, ultimately, the United Kingdom — which also includes Northern Ireland.

It retained its own separate legal and education systems and was granted its own devolved parliament in Edinburgh in 1999 but control of defense, borders and taxation remain with the U.K. parliament in London’s Westminster and ultimate authority lies with Queen Elizabeth II.

Britain’s government agreed to recognize the referendum, gambling that a likely ‘No’ vote would kill off the issue of Scottish independence for decades. But with polls now putting a ‘Yes’ vote within reach, the U.K. faces the serious prospect of a break-up.

How likely is Scotland to become independent?

Within two generations, Scottish independence has gone from an eccentric fringe movement to a dominant political force that is on the cusp of victory.

Until last month, the pro-Union Better Together ‘No’ campaign enjoyed a consistent and comfortable lead in opinion polls but a sudden surge in support for the pro-independence ‘Yes’ side has all but eliminated the gap. A “poll of polls” published by ScotCen on Monday puts ‘No’ at 51 percent and ‘Yes’ just two points behind, at 49 percent. “In a vote where the winning side needs 50% + 1 of votes cast, it is clear that neither side can now be completely confident of victory,” the research organization said.

A major YouGov poll last week gave the ‘Yes’ side a slim majority, spooking the global markets and causing the pound sterling to sink by 1.3 percent on foreign exchange markets before recovering. British lawmakers, who previously vowed to stay out of Scotland’s national debate, have been making urgent visits to Scotland to implore voters to save the United Kingdom.

What is the case for independence?

The ‘Yes’ campaign is led by First Minister Alex Salmond, whose Scottish National Party has governed since 2007. It says Scots should have total control of their own affairs and that revenue from Scotland’s offshore oil fields would sustain the country’s economy. Support for independence was boosted by the election in 2010 of a Conservative British government, angering voters in Scotland where the Conservative party remains deeply unpopular.

How star-studded has the campaign been?

What happens if Scotland votes ‘No’?

No matter what happens, Scotland’s relationship with the rest of the U.K. will change. In a last-ditch attempt to persuade Scots to vote ‘No’, Cameron last week promised future extra powers for Scotland’s existing devolved parliament if Scots chose to vote ‘No’. However, this olive branch may be too late to change Thursday’s result; Cameron had rejected extra powers as a middle-way option on the ballot paper, gambling that most voters would choose ‘No’ if given a straight Yes/No question on independence. Offering more devolved government at such a late stage has been dismissed by the ‘Yes’ side as a panic measure.

And whatever the outcome, the 18-month campaign has left social divisions as supporters on both sides trading acrimonious barbs over social media using the hashtag #indyref. Thursday’s poll has become a topic to avoid in bars and family gatherings. Fiona Scott, whose father taught Salmond at school, wrote in an open letter to The Herald newspaper on Saturday that the referendum “has succeeded in creating divisions across Scotland that were not there before and will still exit after the referendum, no matter which way the vote goes.” She added: “Relationships between neighbors are now threatened if you indicate which way you are voting.”