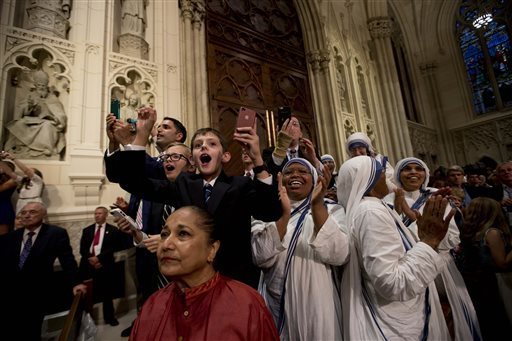 Pope Francis turned from the halls of power to the hearth on Saturday, leaving behind Congress and the United Nations on his six-day United States trip for Philadelphia and events marking the World Meeting of Families — the original reason for the timing of his visit.

The third and final leg of the pontiff’s first visit to this country will feature the week’s biggest events — organizers expect perhaps one million people each at a celebration on Saturday evening at a site along the Benjamin Franklin Parkway and at a Mass there on Sunday afternoon. Francis will most likely speak about the church’s teachings on the value of family life.
Continue reading the main story
Related Coverage

Old St. Joseph’s Church in Philadelphia, which embraces immigrants, is looking forward to the pope’s visit to the city.
Next Stop: Immigration Advocates in Philadelphia See Affirmation in Pope’s VisitSEPT. 25, 2015
Francis in America: Pope Francis, in New York, Takes On Extremism and InequalitySEPT. 25, 2015
The Spanish Mass at St. Simon Stock Church in the Bronx, which now includes the parish of the former St. Joseph’s Church. They merged this summer when St. Joseph’s was closed.
Francis in America: In the Bronx, ‘Poor Church’ Is More Than a Papal PhraseSEPT. 25, 2015

The first stop on Saturday is the Cathedral Basilica of Saints Peter and Paul, the 151-year-old seat of the Philadelphia archdiocese, to celebrate Mass for bishops and priests. Later, he will meet with seminarians at St. Charles Borromeo Seminary, and in the afternoon he will visit with Hispanic-Americans and immigrants at Independence Mall, where he is expected to speak about religious liberty and immigrants from a lectern used by Abraham Lincoln.
Photo
A banner bearing the image of Pope Francis hung outside the Pennsylvania Convention Center in Philadelphia on Friday. Credit David Goldman/Associated Press

On Sunday morning, Francis will meet with bishops attending the families meeting and will call on detainees, their families and staff members at Curran-Fromhold prison, where inmates have made him a chair, before the big afternoon Mass.

Jumbotrons flanking the parkway and placed in spots downtown will allow viewers to watch Francis live all weekend, according to planners.

He is scheduled to leave for the Vatican at 8 p.m., seen off by a delegation including Vice President Joseph R. Biden Jr. and his wife, Dr. Jill Biden; Gov. Tom Wolf of Pennsylvania; and Mayor Michael A. Nutter of Philadelphia.
Pope Francis’ Visit to U.S.
Latest news and features on Pope Francis’ visit to Washington, New York and Philadelphia this week.

So far on the visit, Francis’ 10th foreign trip, the pontiff’s main themes have been protecting the environment, cherishing immigrants and appealing for dialogue, with forays into other close-to-the heart themes.
Continue reading the main story
Francis in America

But family issues have been forcing themselves to the top of the agenda at the Vatican, and the pope’s speeches capping off the families meeting here will be listened to closely for what they may say about how the church will address same-sex unions and whether it will change its rules regarding divorced and remarried Catholics.

Major changes are not expected, though in recent months, Francis has eased the path to annulments and had once said, “Who am I to judge?” regarding gay priests.

Within a week of his return, the bishops of the church will convene a major meeting, or synod, on the family at the Vatican.

He has also as the pope of the periphery — his word for the marginalized peoples of the earth — made a point of spending time with the homeless in Washington and students in Harlem.

Philadelphia has been preparing for Francis for months. A central part of the city is in a security stranglehold. Law enforcement agencies set up 19 checkpoints overnight into Friday to create a secure zone around the parkway and seven more at Independence Mall, near the Delaware River. Passers-by must go through a magnetometer and have their bags inspected.

Streets have been closed and public transit curtailed. A stretch of Interstate 76, a major artery from the city’s northern and western suburbs, was supposed to close Friday evening. Interstate 676, which runs east-to-west through the heart of the city, was also set for closure there in both directions, while the Ben Franklin Bridge between Philadelphia and Camden, N.J., was to be closed until noon Monday. And do not think of using any exits in central Philadelphia on Interstate 95. They are closed.

The Southeastern Pennsylvania Transportation Authority, called Septa, limited service and required some passengers to buy special Papal Passes in advance. Suburban Station, one of three commuter-rail stops in central Philadelphia, was closed for the weekend. Schools, courts and city government offices were shut down for varying time periods starting Wednesday.

Still, many residents in this city of 1.6 million showed the same forbearance that New Yorkers displayed during the pope’s time there from Wednesday to Friday.

“We need this,” said Irene Perry, 59 and a Catholic, who was sitting Friday on her stoop watching people pass through security near the Benjamin Franklin Parkway. “We need help. We have homeless, and people without jobs, and I think it’s a beautiful thing that Pope Francis is coming, and he’s going to bless all of us. We need peace in the world.”

Brad Guigar, 47, a resident of the Fairmount section next to the parkway, said he accepted the inconveniences because of what he sees as the pope’s compelling message.

“This is has been something that everybody has had to change their lives for,” said Mr. Guigar, a cartoonist. “If we’ve got to not take Septa for a day in order for him to come in and talk about important things, then I’m willing to kind of shrug it off.”

Pope John Paul II started the triennial World Meeting of Families in 1994. This is the first time it has been held in the United States. Some 18,000 people from more than 100 countries attended the Vatican-sponsored event, a spokesman said. Six families from Australia, Congo, Cuba, France, Syria and Vietnam are expected to attend the families festival event Saturday evening in a group of guests that includes a musical lineup with Andrea Bocelli, Juanes, the Fray, the Philadelphia Orchestra, the comedian Jim Gaffigan and Aretha Franklin.

Mark Wahlberg is the host.

“His humility and his concern with people, how he refers to himself as the son of an immigrant — I’m most impressed with that,” Ms. Franklin said.