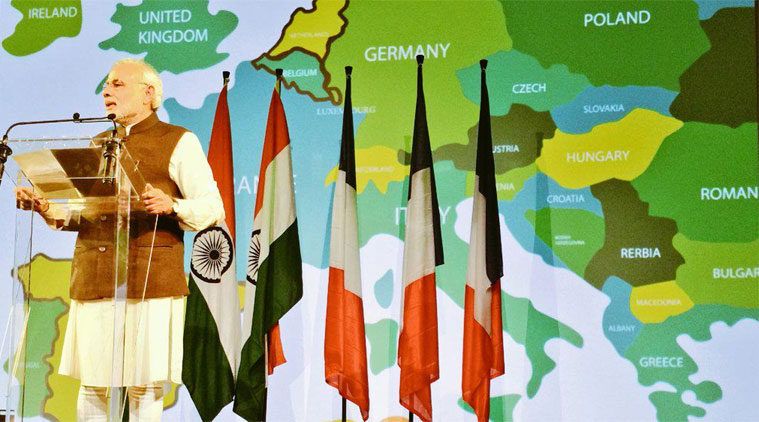 India has the “right” to be in the UN Security Council and the days of “begging” for it are gone, Prime Minister Narendra Modi has said, as he pitched for a permanent seat in the powerful world body.

Also Read: Modi slams UPA govt, says Coal blocks given away like you give handkerchiefs

Addressing a congregation of NRIs here before winding up his four-day tour of France, Modi last night said India had made lot of sacrifices for world peace since World War I and even after the UN was founded.

It has been the largest contributor to the peacekeeping forces across the world, he said.

“Still, India continues to yearn for a (permanent) seat in the UN Security Council. I urge the world, it is time to respect the peacekeeping efforts. It is the right of the sentiments of Mahatma Gandhi and Gautam Buddha. Those days are gone when India had to beg. Now our nation wants its right,” he told the gathering of about 3,000 Indians amid chants of “Modi, Modi”.

“There is hardly any other country which has such moral authority as the land of Mahatma Gandhi and Buddha. I hope that when the United Nations celebrates its 70th anniversary (this year), it will especially think about this,” the Prime Minister said.

India has been pitching for a permanent seat in the expanded membership of the UNSC, arguing that the existing body does not truly reflect the contemporary world realities.

To buttress his point, Modi referred to his visit earlier in the day to a war memorial in Lille region of France set up as a tribute to about 10,000 Indians who got martyred while fighting alongside France in World War I.

Modi said he wanted to send out a message to the world to realise that Indians have been ready to sacrifice their lives for peace since as long as one century.

“I want the world to know that 14 lakh Indians put their lives at risk by participating in the World War I…Who were they fighting for? Not for India or expansion of India …Thousands of years of India’s history is testimony to the fact that it has never indulged in aggression,” Modi said.

“Indian soldiers fought shoulder-to-shoulder with France…They fought for somebody else,” he added.

“Sometimes, history is forgotten. Those who forget history will lose their right to write one,” he said, adding that, “India is known for its sacrifices…One can fight for oneself, but to die for others is different.”

India along with Brazil, Germany and Japan have formed the G4 grouping to press for speedy UNSC reforms and their inclusion in the powerful organ of the world body.