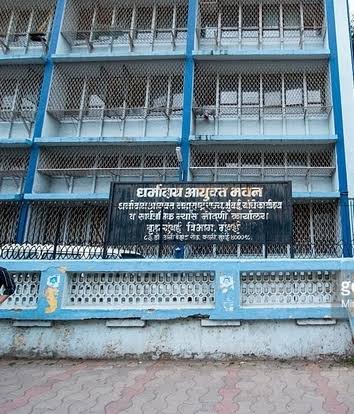 Worli Charity Commissioner’s Office Serial Part 1
Mumbai Correspondent / Editor-in-Chief Anil Mahajan
The Office of the Charity Commissioner is an important place for the common man. This office registers all the temples, trusts, societies, institutions, circles and many more in the state. Lawsuits against all these registered institutions are also conducted here. However, the picture is getting better in the office of the Charity Commissioner at Worli. On the contrary, we can see the plight of the citizens here. The team of Garja Maharashtra News Channel personally visited the office and inspected the picture.

The office of the Charity Commissioner at Worli is functioning smoothly. As per the rules, this office should have a total of 13 Assistant Charity Commissioners and 1 Deputy Commissioner Charity Officer. However, at present only 3 Assistant Charity Commissioner officers are working here. Insufficient manpower in the office, so it has become a habit to delay the work of the citizens. Not only that, instead of working on quality, there are ways of working in the office with interest in mind. Doubts like that? Creating. There have been several complaints from RTI activists. However, no action is taken on the complaints. All the mismanagement is on.
When the team of Garja Maharashtra Vahini reached the Worli Charity Office, it was seen that the work of many citizens was stalled. Citizens’ work is not done on time. Citizens have to stay here for a day, even if it is a simple task like registering an organization.

When the representative of Garja Maharashtra Vahini contacted the office superintendent Seema Gadgil about the mismanagement in the Charity Commissionerate, he refrained from speaking and said that the senior officers would not give a byte. Various types of scams run in the Charity Commissionerate will be carried out in various programs in the next part of Maharashtra. Relevant officials will also be informed about the incidents in the office.

Meanwhile, information on various issues related to property, including the office at Palghar, will be disseminated to the public. The formal complaint will be lodged with the Principal Secretary, Lawn Judicial Ministry, Mumbai. Also, there is a demand from the public for a relevant inquiry at the senior level