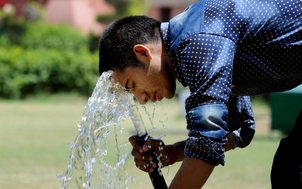 Posted By: s.m.fanusPosted date: May 19, 2016in: NewsNo Comments
Spread The News

Blistering heat torrefied north India with Palodhi in Rajasthan simmering at 51 degrees and the maximum in Ahmedabad shattering a century-old record even as the weatherman said cyclonic storm ‘Roanu’ is likely to bring heavy rains in Andhra Pradesh, Telangana and Odisha.

In the East, officials said about 4,000 people were rendered homeless due to floods after torrential rains since Tuesday night at Dharmanagar in Tripura, while the arterial Assam-Agartala National Highway remained waterlogged, cutting the state off from the rest of the country.

Delhi reeled under sweltering conditions, recording the maximum at 43 degrees. The minimum the city was 28.6 degrees.

Extreme heat broke 100 years old record in Ahmedabad, as the maximum temperature in the city touched 48 degrees. One person today died due to heat stroke, taking the sunstroke toll to four this summer, officials said.

“As per data, the city had recorded 47.8 degrees Celsius on May 27, 1916,” said Jayanta Sarkar, Director of Meteorological Centre of IMD.

Palodhi was the hottest place in Rajasthan this season so far and the hottest in the country for the second consecutive day at 51 degrees, closely followed by Churu at 50.2, Bikaner and Barmer at 49.5, Ganganagar at 49.1, Jaisalmer at 49, Kota at 48.2 and Jaipur at 46.5 degrees.

The eastern and peninsular states of Andhra Pradesh, Telangana and Odisha brace for very heavy rainfall due to cyclonic storm ‘Roanu’, which will intensify into a “severe cyclonic storm”.

Issuing alerts to the three states, the weatherman said although the cyclone will make a landfall in Bangladesh on the intervening night of May 21 and 22, “heavy to very heavy rainfall” is expected in Andhra Pradesh, Telangana and Odisha.

The National Disaster Response Force (NDRF) has deployed over 130 personnel in Andhra Pradesh in order to counter the aftermath of the cyclonic storm.

Hisar in Haryana simmered at 46 degrees, while in the Union Territory of Chandigarh, the mercury settled at 43.1.

Punjab’s Amritsar had the maximum in the state at 43.8 degrees.

In Uttar Pradesh stifling conditions prevailed due to prevailing dry weather and intense heat wave. Banda remained the hottest place in the state for the third straight day, recording the maximum at 47.2 degrees, followed by Allahabad at 46.7, Jhansi 46.4 and Orai 46.

The district administration of Lucknow, which had a high of 44.4, has directed schools to declare summer vacations from May 23.PTI