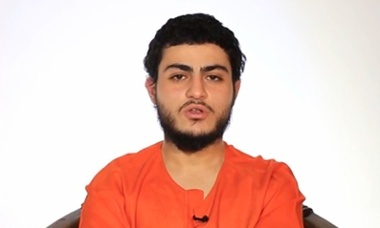 The family of an Arab Israeli man shown being killed by a young boy in the latest propaganda video for Islamic State (Isis) has denied he was a spy for the Israeli intelligence services.

The video, published by the group’s Furqan media outlet, shows Muhammad Musallam, 19, sitting in a room wearing an orange jumpsuit and talking about how he had been recruited and trained by Mossad. He said his father and elder brother had encouraged him.

It then shows Musallam being escorted to a field and being shot in the head by a boy, described by an older, French-speaking fighter as one of the “cubs of the caliphate”. The boy appears to be around 11.
Musallam’s mother, Hind, denied her son was a Mossad agent, saying that Isis had “brainwashed” him and was attempting to take away her son’s honour because he wanted to leave the extremist group.

“Not only have they killed our son but they wanted to destroy his image and our image. Look at our house. I work as a house cleaner and his father is a bus driver. If we were on the Mossad pay roll, I would not need to work. Honour is all we have. And they want to take that from us.”

Hind, 46, said Muhammad, who worked in the fire department in Wadi Joz, East Jerusalem, told his parents four months ago that he planned to go to Turkey with a friend.

“He packed his bag in front of me and he seemed so happy,” she said tearfully. “He asked us for money for his journey. And then he left. After that we did not hear from him.”

Two months after he went missing the family contacted the police, concerned that something had happened to Muhammad en route to Turkey. Then Muhammad contacted the family through Skype and said he was with Isis.

“We saw his face and he was sitting with his friend. He said he would be receiving a lot of money from Isis and that they were going to find him a house and pay for his marriage.” At that time, according to his mother, he seemed enthusiastic to be with Isis.

“I’m sure they brainwashed him. He’s just a kid. He doesn’t know better … They did not give me the chance to hug him or smell him or say goodbye. What kind of people are those. They are the devil. ”

Hind said she had spoken to her son three or four times on Skype. Last time he called he said he was afraid and wanted to come home and asked for money to come home. The family sent him $400 (£265) but did not hear from him again.

Hind used an Arabic slang expression to suggest that joining Isis was easier than leaving. The family believe that a roommate or another member of the group may have told superiors of Muhammad’s plan to leave.
Muhammad’s father, Said, a bus driver with the Israeli bus service, Eged, said: “My son was cheated and I am very sad that no one in the Israeli political leadership contacted me. The only one who spoke up for him was [Arab MP] Ahamd Tibi in the Knesset, who said this is the inevitable end of all the kids who join Daesh [Isis’s Arabic acronym].”

The authenticity of the footage, which also appeared on Twitter feeds used by Isis supporters, could not be independently verified by the Guardian.

‘Raising tomorrow’s mujahideen’: the horrific world of Isis’s child soldiers
Read more
Israeli security officials said they were aware of the video but could not confirm that it was authentic.

The man and the boy who appear in the Isis video are French citizens, an official told The Associated Press on Wednesday.

The man in the video speaks with a southern French accent and investigators are probing if he could be the step-brother of Mohammed Merah, who killed seven people in attacks on a Jewish school and paratroopers in the south of France beginning on March 11, 2012 exactly three years ago.

In the video, the man praises attacks on Jews “in your own stronghold in France” as he and the boy stand behind the man about to be killed.

Several experts, including the journalist David Thomson, who wrote a book about French jihadists, say the man is Sabri Essid, reportedly the half-brother of Merah.

Wednesday marks the third anniversary of the start of Merah’s killing spree, which ended with him dying in a shootout with police.

Natasha Underhill, a senior lecturer in international relations at Nottingham Trent University and expert on insurgency and international terrorism, said the conflicts in Iraq and Syria had made it easier for children to be exploited by Isis.

“The legacy of violence in these countries essentially means that these children have become entirely desensitised to the violence,” she said. “This in turn makes them almost immune to it and thus they can be moulded much easier into becoming killing machines.”

Underhill said the use of children in particular was likely to be a message by Isis that the group has longevity, with the ability to indoctrinate youth. “The fear with this is that these youths tend to be much more extreme as they really see no limits to their use of violence,” she said.