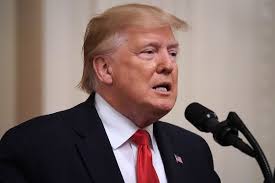 US President Donald Trump said on Tuesday that those who hate the US, should leave the country. At the same time MPs are planning to vote on a resolution condemning their ‘racial observations’

Washington: US President Donald Trump has continued his attack on a group of Democrats of the local minority community on Tuesday, saying, “Those who hate the US should leave the country.” Trump said in a tweet , “Our country is independent, beautiful and very successful. If you hate our country, or you are not happy here, then you can go! ”

Trump defended his earlier tweet remarks in the tweet series and targeted Congress women. MPs are planning to vote on a resolution condemning their ‘racial offenses’

Trump rejected these criticisms. He said, “Those tweets are not racist. There is no blood of racial malice in my veins. “He also ridiculed the Democrats’ plan to vote for the MPs and said that the Republican party should not show any weakness in such a way and should not be ensnared in their trap.