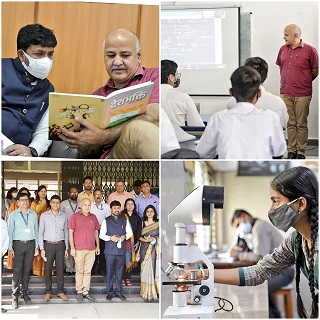 Says that the BMC spends more than INR 1,08,000 per municipal student with nothing to show for it, Demands major reforms in education policy across all levels of governance

The Aam Aadmi Party Mumbai today, welcomed Maharashtra Minister of State & NCP Leader Shri Sanjay Bansode’s decision to replicate Delhi’s Education Model for schools in Maharashtra. Yesterday, Minister Sanjay Bansode visited Delhi’s government schools, and was introduced to the novel academic methods, curriculum and administrative practices that have been implemented in Delhi by the AAP. Upon being taken through the newly developed ‘Schools of Specialized Excellence’ (SoSE) model, the newly constructed laboratories & playgrounds, and the Entrepreneurship and the Deshbhakti curriculum, the Minister went on to attest that Delhi’s Education Model is the need of the hour when it comes to a model educational policy reform, for Maharashtra, and for India at large.

It is a well-known fact that Maharashtra & Mumbai are faced with an alarming need for transformative educational reform. As compared to more than 16 lakh students studying in Delhi’s 1000 government schools; there are only 2.72 lakh students in the existing 1,145 BMC schools in Mumbai – a number that has been ominously falling over the last six years. In 2019, Praja warned Mumbai’s ruling parties that, if the trend follows, the BMC will have no new student enrollments by 2028. This is despite the BMC spending an astonishing INR 1,08,000 annually on each student, with nothing to show for it; as compared to INR 1,02,000 spent per student annually under the Delhi government. If the outcomes of such a financial outlay were actually realised, one would expect that students would opt away from expensive private schooling – as in Delhi, where more than 2.4 lakh private school students applied to shift to Delhi’s public schools – which now supersede most private schools in terms of infrastructure and pedagogy.

Unfortunately, the situation is far too grim in Mumbai’s schools for this to even be a remote possibility, as the Shiv Sena & the MVA continue to abdicate their responsibility towards public education. In the face of comparable student budget outlays, the difference in the lived realities of our cities’ students forces us to ask – In Mumbai, why have we failed to provide our children with bare minimum standards of quality education for so long, and why is it that education in Mumbai is fast becoming an increasingly private, and subsequently, a privileged institution? While the AAP in Delhi has emphasized on outcome-oriented policy measures to reduce dependence on private facilities; while the BMC has shut down, or leased, more than 220 schools to private entities between 2009-2019, disastrously inhibiting access to education for the poor in Mumbai.

While we welcome Maharashtra Minister of State & NCP Leader Shri Sanjay Bansode’s decision to replicate the Delhi Education Model in Maharashtra, we are afraid that this may become one more empty promise under a PR-driven MVA government, and another case of showmanship with no underlying substance. If public education is to be transformed, it must be backed, at levels of governance, by an honest intent of public welfare, as demonstrated by the AAPs work in Delhi. What separates the AAP is that our policy claims are backed by tangible outcomes and results.” said Sumitra Shrivastav, AAP Mumbai Working President.

“When voted to power, this is the revolutionary change that AAP Mumbai seeks to bring to BMC schools, through it’s education policy vision. We hope that this is a wake-up call for the Shiv Sena & the BMC administration, which has slowly driven public education in Mumbai to its demise, and must alter its course of action on a war-footing if it wants to steer away from a complete collapse of municipal schools.” said Dwijendra Tiwari, AAP Mumbai Working President.