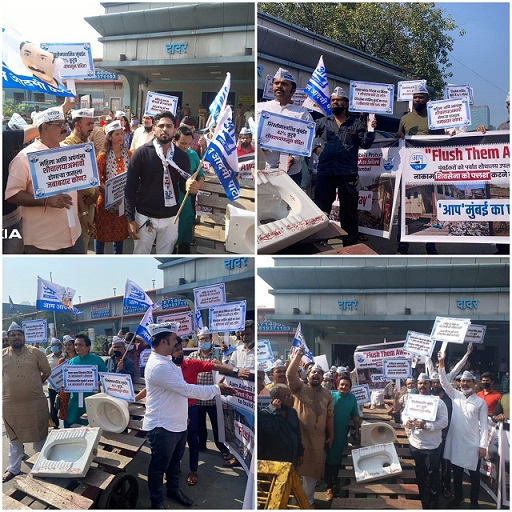 Carries two toilets on handcarts in Dadar East, says that the BMC and Shiv Sena remain apathetic to the lived reality of Mumbaikars*

The Aam Aadmi Party today, staged a protest at Dadar East against the BMC’s utter failure to improve Mumbai’s public conveniences and toilets, develop sanitation infrastructure accomodating the needs of our growing population, and provide even the most rudimentary facilities required for Mumbaikars to live a safe, healthy, and dignified life. AAP Mumbai Working Presidents Ruben Mascarenhas, Sumitra Shrivastava, and Dwijendra Tiwari led the protest, entitled “Flush Them Away!” in which two toilets were carried on handcarts by party volunteers and supporters – representing the struggle of Mumbaikars, who have to run from pillar to post for access to clean and safe public & community toilets in the city.

The BMC and the Shiv Sena had not built a single community toilet for more than a year in 2020. In 2019, the BMC had promised that 22,770 toilets would be constructed within a year – a hefty claim which did not achieve even 25% completion till 2021. While the Government proudly claims that Mumbai is open defecation free, 78% of community toilets in Mumbai’s slums lack access to a reliable water supply, and most BMC run toilets are dilapidated, at the brink of collapse, or in an extremely filthy condition due to lack of maintenance. “Without even completing 25% of past toilet projects, new construction proposals with budgets exceeding 340 Crore were passed in 2021 – another case of public funds being spent with no tangible outcome to show for it – something that has become a norm under the current BMC regime.” said Ruben Mascarenhas, AAP Mumbai Working President.

“The BMC passes proposals, siphons off the money, and nothing happens on the ground. There is no sense of responsibility to policy outcomes or output. There is less incentive to work on toilet projects, as the outlays are relatively smaller, leaving lesser scope to siphon public funds. While the BMC remains apathetic to the lived reality of Mumbaikars, in several parts of Mumbai, one toilet is still being shared between more than 150-200 residents. In a Tier 1 city like Mumbai, it is a shame if access to clean and safe toilets is still such a prevalent concern.” said Dwijendra Tiwari, AAP Mumbai Working President.

“The problem of sanitation disproportionately affects slum areas, and women in particular, as the number of public or community toilets available for women are sizably lesser. The lack of access not only discourages women’s participation in the workforce, but also renders them extremely vulnerable to infectious diseases and restricts their capability to move freely in and around Mumbai.” said Sumitra Shrivastava, AAP Mumbai Working President.