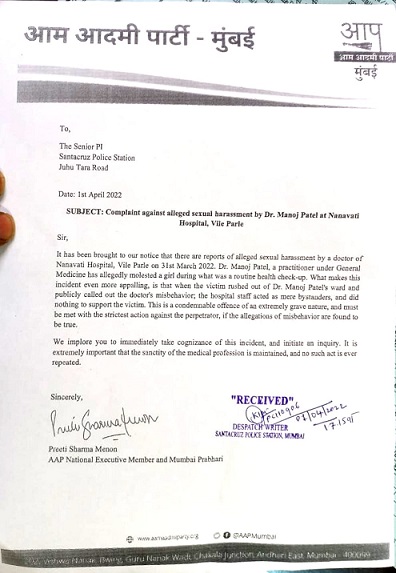 The Aam Aadmi Party today submitted letters of complaint to the Dean of Nanavati hospital, Vile Parle, and the Santacruz Police Station, in response to reports of alleged sexual harassment by a doctor of Nanavati Hospital on 31st March 2022. Dr. Manoj Patel, a practitioner under General Medicine has allegedly molested a girl during what was a routine health check-up. What makes this incident even more appalling, is that when the victim rushed out of Dr. Manoj Patel’s ward and publically called out the doctor’s misbehaviour; the hospital staff acted as mere bystanders, and did nothing to support the victim.

“This is a condemnable offence of an extremely grave nature, and must be met with the strictest action against the perpetrator, if the allegations of misbehaviour are found to be true. We demand that the authorities take immediate cognizance of this incident, and initiate an inquiry. It is extremely important that the sanctity of the medical profession is maintained, and no such act is ever repeated.” said Preeti Sharma Menon, National Executive Member and Mumbai Prabhari.