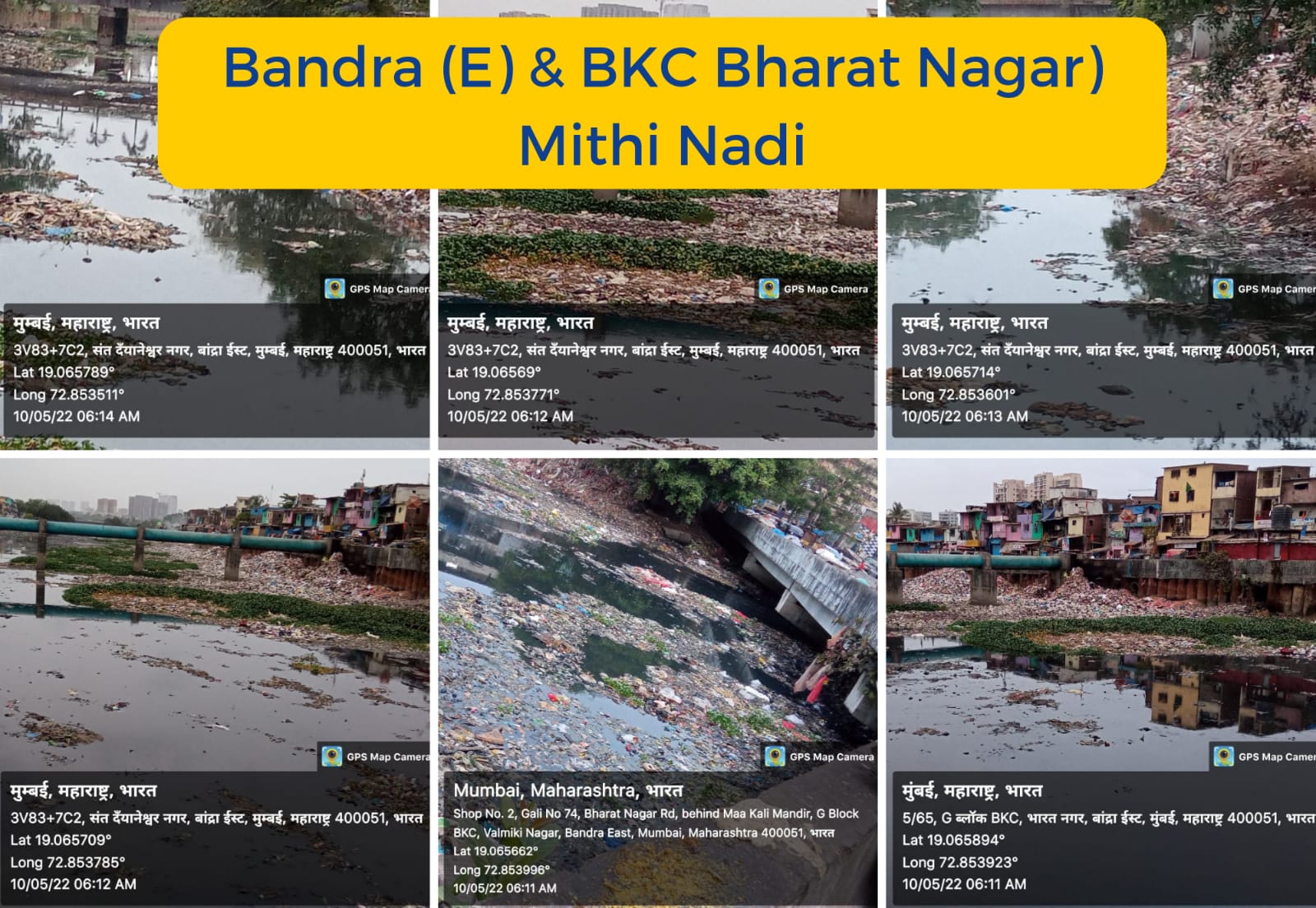 The Aam Aadmi Party’s Mumbai unit went across to all flood prone areas and inspected the rivers, nallahs and storm water drains (SWDs) that cause the flooding in the respective areas and were shocked to find out that there is absolutely no pre monsoon de-silting done!

Merely two weeks are left for the onset of the Monsoon Season in Mumbai but once again BMC has failed to clear the rivers, nallahs and SWDs of silt and debri – which means they will overflow and once again major areas of the city will have to face floods. Even by the BMC’s own figures major nallahs and SWDs in the city are far from desilted. If the BMC’s own documents and their online tracker are to be believed only 43% of the city’s nallahs & SWDs and only 84% of Mithi River have been desilted! As per BMC large parts of nallahs including the Poisar river, Chandravarkar Nallah & 48 other nallahs have not even begun desilting. Only 28 % of South Mumbai’s nallahs and SWD’s have been desilted. Only 58% of the Eastern Suburbs nallahs and SWDs have been cleaned. Similarly in the Western Suburbs 50% of the nallahs and SWDs have not been cleaned. In total even the BMC admits it has only cleaned 55% of the city’s minor nallahs.

The shocking truth is that even these figures are fake and nowhere near ground reality!! AAP volunteers and leadership went to various spots along the Mithi and saw that the river is still hopelessly choked up at Jogeshwari, BKC, Bandra East & Kalina – this poses a major threat to all Western Suburbs. Even smaller Nallahs & SWD’s are still choked up across the city nullahs. The Eastern Suburbs are worse off as none of the nallahs have even been attempted and the 58% claim is totally fake!

“The Shivsena Government has shown complete apathy to the death and devastation caused in Mumbai year after year. In power in BMC for three decades and now in the State too, their only interest is in looting the BMC and their utter recklessness in ignoring the pre monsoon preparation is nothing short of malafide criminal intent. It is time to bury the ghost of the “Spirit of Mumbai” and file criminal charges against those responsible for the floods that we are inevitably going to face.” said Mumbai President Preeti Sharma Menon.

“The sheer lies behind the reportage of the cleaning of the Mithi River proves that there is something rotten in the BMC. There seems to be a massive nexus between the contractors cleaning the river and Municipal Authorities and they think the lives of Mumbaikars is a cheap price to pay.” said AAP Leader and Mumbai’s Riverman Gopal Jhaveri.

The Aam Aadmi Party demands that an external independent body be appointed to audit the pre monsoon preparation and all the contractors and officers who have failed to do the work and those that have misreported the figures be tried for attempted murder. And, if the city floods again this monsoon, criminal negligence cases should be filed against the Councillors of those wards. It is time that Mumbaikers put these criminals in jail!