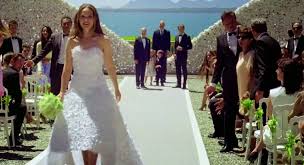 Natalie Portman walks out of her wedding

It started with an inconspicuous invitation, a very special Miss Dior event on February 4 that everyone was invited to. Not a hint of what it was—until this morning, the short film directed by Anton Corbijn was released.  It’s the day of Miss Dior a.k.a Natalie Portman’s wedding—for the brand’s new fragrance—Miss Dior—the scent of freedom.

The film showcases a singulary inspiring Portman, who dares to flee towards a future that she decides for herself. As she prepares for her big day in the French Riviera, walking down the isle in her Dior Couture gown to the music of Janis Joplin’s Piece Of My Heart, she can only picture running away into the wild, released from all ties. And so she does, walk (run) down the altar towards a free self. She strips off her couture, revealing a strapless black dress, ready to be swept off by a helicopter.