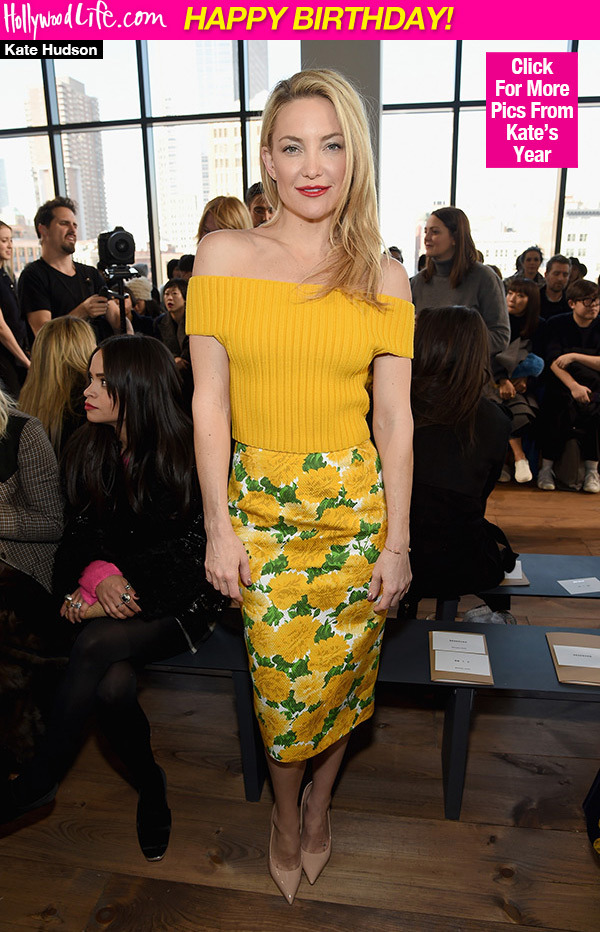 Kate Hudson’s birthday is filling us with glee! The actress was born on April 19 and we here at HollywoodLife.com want to celebrate her special day with a look back at her incredible year!

Kate Hudson is celebrating today? We wish we were there — so we can tell her Happy Birthday in person! The star of movies Bride Wars and How To Lose A Guy In 10 Days as well as notable guest TV appearances like her role as Cassandra July on Glee turns 36 on April 19. Join HollywoodLife.com as we honor Kate by looking back at her past twelve months!

Kate Hudson is practically Hollywood royalty. Born in Los Angeles to legendary actress Goldie Hawn and Bill Hudson, Kate was raised by her mom and Goldie’s long-time partner, action star Kurt Russell. Kate went into the family business, finding success in movies Almost Famous, How To Lose A Guys In 10 Days and You, Me and Dupree. Along with her role in 2014’s Wish I Was Here, she also appeared in the crime thriller, Good People.

In addition to being a powerful actress, Kate is quite a fashion plate, especially over the past twelve months. Whether she was wowing the red carpet at the Wish I Was Here premiere or stunning the crowds at the PEOPLE Magazine Awards in December or when she appeared on the cover of July 2014 issue of InStyle, Kate was turning it out!

Kate’s love life underwent a serious change this past year, as she called off the engagement to her longtime partner, Matthew Bellamy. After three years of being engaged to the Muse front man, the two split. Kate allegedly was handling the break-up by hooking up with former flame, Derek Hough, but the two said they were just friends.

When Kate was seen spending time with Coldplay singer, Chris Martin, everyone wondered if the two had something going on. Turns out, also just friends. In fact, they’re gym buddies!

2015 is looking great for Kate. In addition to a role in the comedy Rock the Kasbah, Kate will also appear in an episode of the television comedy, Barely Famous!

Happy Birthday, Kate! HollywoodLifers, leave your birthday wishes for Kate down below!