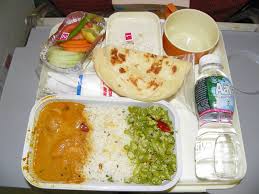 Country’s national carrier Air India has decided to serve only vegetarians meals in 60 to 90-minute domestic flights from January 1. Owing to the less time available for serving in these small duration flights and using too many varieties takes more time, the Air India has taken this decision. Also, non-vegetarians can eat vegetarian but vegetarians cannot eat non-veg items. A flight between 61 and 90 minute duration gives the crew a window of 30 to 40 minutes to serve passengers. CMD A Lohani said, “Air India presently provides cold veg snacks on 60-90 minute flights,however from now it will serve proper hot veg meals.” Air India has five categories of flights on the domestic sectors – breakfast from 5.30 am to 9.30 am, high tea from 9.30 am to 11.30 am and 3 pm to 6.30 pm, lunch from noon to 2.30 pm, supper from 6.30 pm to 10.30 pm; and dinner from 11 pm onwards. Flights on busy sectors like Mumbai-Delhi and Mumbai-Bangalore are likely to be affected most by Air India’s a test decision. In June 2015, Air India had to suspend two staffers after they served meat to some Jain pilgrims, who were returning from Sindhu Darshan festival, on Leh-Delhi flight. Incidentally, the 182-seater Air India flight was chartered by about 122 pilgrims who had visited Sindhu Darshan, held from June 23 to June 26, in Ladakh capital city and were returning back to New Delhi. The Sindhu Darshan Festival, as the name suggests, is a celebration of River Sindhu, also known as the Indus. It was first started in the October, 1997 and continues to be held every year since then, attracting large number of foreign as well domestic tourists.