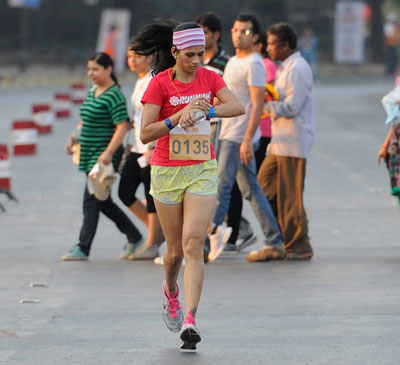 Mumbai marathon toppers to be sent for New York race

MUMBAI: Tata Consultancy Services, co-sponsors of the Standard Chartered Mumbai Marathon to be run on January 18, on Friday announced it would sponsor the top two Indian finishers in both men’s and women’s full marathons at the TCS New York City Marathon in November.

“We are pleased to announce that the top two Indian men and women finishers in the 2015 Standard Chartered Mumbai Marathon will be fully sponsored at the TCS New York City Marathon 2015. All their expenses will be borne by us,” Ajoy Mukherjee, Executive VP and Global Head of Human Resources of the software giant, said at a media conference.

“We will make sure through the Athletics Federation of India that all the necessary training programme to take part in the TCS New York City Marathon are available to them. Hopefully in the long run it will help India to get into the Olympics (marathon),” said Mukherjee.

AFI president Adille Sumariwalla welcomed the decision. Sumariwalla, former national men’s 100 metre champion, said the NYC Marathon is among the biggest in the world and it is a great opportunity for our athletes to run there “with the best in the world outside India where the conditions are not the same.

Top Indian finishers among men and women respectively in the last edition of the Mumbai race – Karan Singh and Lalita Babar – said their focus at present was to do well on Sunday.

Lalita, who won a bronze medal in the women’s 3000m steeplechase event at the 2014 Incheon Asian Games, also said her focus was on the race to be held here in two days.

“I first have to do well in the Mumbai Marathon and only then can I make it to the New York Marathon. It’s a good opportunity for me if I qualify,” she said.