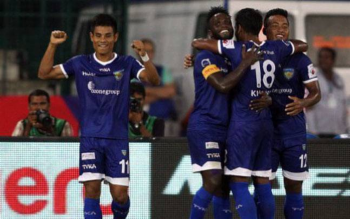 Jeje Lalpekhlua struck twice as Chennaiyin FC produced a stellar display to thrash Delhi Dynamos FC 4-0 in an Indian Super League (ISL) clash at the Jawaharlal Nehru Stadium here on Tuesday evening. Jeje found the net in the 40th and 54th minutes after Mendoza Valencia (17th minute) and Bruno Pelissari (21st) had given the hosts an early 2-0 lead. Chennaiyin, who were lying at the bottom of the ISL table a couple of matches ago, have now climbed to the fourth spot with 16 points from 12 games. Delhi on the other hand, missed the chance to go top of the table as they continue to lie at the third spot with 18 points from 11 matches. Both teams made a cautious start, but the hosts were seeing more of the ball in the opening stages. It was the visitors, however, who had the first big chance of the game when Adil Nabi played Florent Malouda through on goal in the 13th minute.

But the Frenchman shot wide of the target. Chennaiyin took the lead shortly after. A long ball from Jeje saw Delhi goalkeper Toni Doblas rush out of his line hoping to clear the threat posed by a rampant Mendoza who was chasing down the ball alongside Souvik Chakraborty. Doblas’ headed clearance fell straight to Mendoza who side-footed the game’s opener into an open net. Pelissari almost made it 2-0 soon after, but he couldn’t keep his effort on target. The Italian though, had a second bite at the cherry in the 21st minute after Lalpekhlua had his initial shot saved by Doblas. The rebound came directly at Pelissari who made no mistake this time around as he scored Chennaiyin’s second past three Delhi defenders in goal. Robin Singh tried to pull one back for Delhi in the 29th minute courtesy of another defence-splitting pass from Malouda. His shot was tipped behind for a corner by Apoula Edel who looked resolute in the Chennaiyin goal. Things got worse for Delhi Dynamos FC before half-time. Rafael Augusto found Mendoza brilliantly with space on the left.

The Colombian then played the perfect low cross to find Lalpekhlua in the box who calmly finished to make it 3-0 for the hosts five minutes before the break. Delhi’s marquee player-cum-coach Roberto Carlos responded by bringing on Richard Gadze for Nabi before the interval. The speedy Ghanaian tried to inject some impetus into Delhi’s attack but the score remained 3-0 at the half-time interval. The game was put beyond any reasonable doubt nine minutes into the second period when Lalpekhlua got his second of the night. It was Mendoza again who caused havoc in Delhi’s penalty box as a flustered Dynamos defence somehow kept out his shot. Lalpekhlua, however, was in the right place at the right time to make it 4-0 after the ball dropped to him in the midst of chaos inside the penalty area. But the Dynamos to their credit, never stopped trying to find a way back into the game. But Chennaiyin’s huge lead proved to be too big a deficit to overcome.