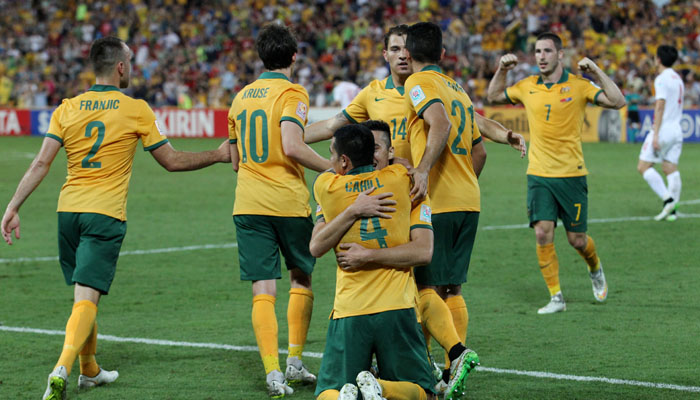 Sydney: Free-scoring Australia will seek continental glory in the Asian Cup final on Saturday but South Korea could gatecrash the party in a hugely anticipated decider between two of the region`s toughest teams.

It could be a case of who blinks first when the heavyweights clash in Sydney, with the hosts seeking a first Asian title since quitting Oceania in 2006, and the Koreans desperate to end a hoodoo stretching back a staggering 55 years.

The Socceroos were runners-up to Japan in 2011 and with a tournament-leading 12 goals, they will start as slight favourites, despite losing 1-0 to South Korea in the group phase.

In that game, coach Ange Postecoglou opted to rest talisman Tim Cahill and was robbed of captain Mile Jedinak due to an ankle strain.

Cahill netted three times in five matches, including a contender for goal of the tournament with his venomous overhead kick in the quarter-final win over China, and he is likely to be central to the plot in one of the biggest games in Australia`s history.

“First 45 minutes against China I touched the ball three times,” said Cahill, his country`s record scorer, who fired both goals in the 2-0 win.

“The defenders had me wrapped up. But it just takes one second for someone to switch off and hopefully I can be on point to make it count.”

Both teams possess players capable of delivering a knockout blow, South Korea hoping golden boy Son Heung-Min can weave his magic as they seek to win a first Asian Cup since 1960 having already defied the odds by reaching the final.

Their title drought is a curious anomaly for a nation who stormed to the World Cup semi-finals in 2002, but they have reached the final — their first in 27 years — despite an injury crisis and a flu bug which swept through the squad, forcing medical staff to work overtime.”It will come down to who`s mentally tougher,” said Korean captain Ki Sung-yueng, who has been a calming influence on his side after losing the dynamic pairing of Lee Chung-Yong and Koo Ja-Cheol in the group stages. “It`s incredible we`ve got this far without two of our best players.”

South Korea are the first team to reach the Asian Cup final without conceding a goal since Iran in 1976, but their resilience will be severely tested by Australia`s firepower in front of a sell-out crowd of almost 80,000 in Sydney.

“We are on the brink of something very special for Korean football,” added Ki. “The boys don`t need me to spell it out to them.”

The players were pelted with toffee — a traditional insult in South Korea — on their return from last year`s World Cup, but German coach Uli Stielike has performed wonders since taking over as they look to emulate the under-23 side`s Asian Games gold medal in October.

As many as 30,000 Korean “Red Devils” fans are expected to add spice to the atmosphere.

Victory for the hosts would be every bit as satisfying after Australia managed just one win in 11 matches last year, while Postecoglou overhauled a side once blessed with outrageous talent by blooding a raft of new players.

Critics who were calling for his head just weeks ago have been forced to eat humble pie.

“Full credit to the boss,” said Aussie goalkeeper Mathew Ryan. “We`ve just got to put the last piece of the puzzle together with a fairytale ending on Saturday and then it will be a master-plan.”