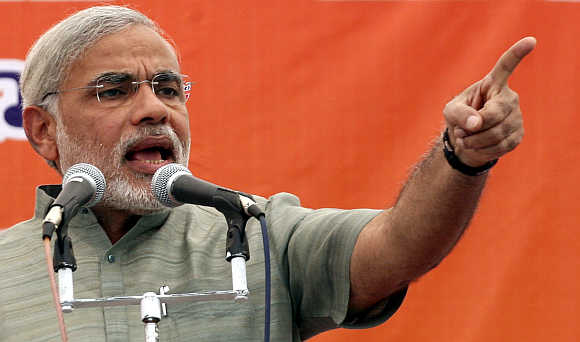 Modi accuses Didi, Left and Cong of being ”hand in glove”

Prime Minister Narendra Modi today tore into the Congress-Left alliance in West Bengal, and accused Chief Minister Mamata Banerjee of “being hand in glove” with the two parties and destroying the state’s glory.

Addressing a poll rally ahead of the second phase of polling on April 11 in the state, Modi accused both Mamata and Left of not being interested in Bengal’s welfare or future as he appealed to people to vote Trinamool Congress out of power and give BJP a chance and see development in the state.

Recalling the glorious history of West Bengal, Modi said, “After independence, Congress, Left, and now ‘Didi’ (Mamata), have all shown faces of destruction of Bengal. Be it Left or ‘Didi’, they both cannot secure your future. They cannot safeguard your fate.

“They don’t talk about development. Left and ‘Didi’ trade charges on rape, corruption, violence. Will this blame game carry on. Who will save Bengal from them? Bengal has seen both their ‘monstrous’ faces and actions…send such people home from government in Bengal,” he said.

Congress and the Left have formed an alliance to fight the Assembly polls in West Bengal to take on the ruling Trinamool.

Modi also hit out at Mamata for not attending meetings called by him as Prime Minister, but meeting Congress president Sonia Gandhi whenever she was in Delhi.

“She is such a CM who feels that she will not go to the Prime Minister’s meeting. But whenever Mamata didi comes to Delhi, she never forgets to meet Sonia Gandhi. We don’t understand this relation.

“Here Left and Congress are aligned together (for the polls), but when Didi goes to Delhi, she surely takes Sonia Gandhi’s blessings and both pose smiling for photo-ops,” he said.PTI