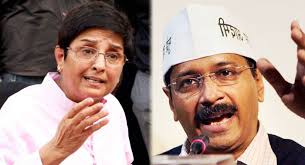 After filing his nomination, Kejriwal yet again challenged Bedi for a public debate ahead of the polls. He even targetted media for focussing more on Bedi claiming that media is “obsessed with her”.

Fighting the Delhi polls on the same agenda as 2013, Kejriwal said that his “biggest challenge is corruption and rising prices in Delhi”. He appealed to Delhites to support AAP the way they did in last election.

Meanwhile, Bedi in a show of strength held a roadshow before filing her nomination on Wednesday. She said that she is confident of the party winnning the polls. “We are all united, everyone wants a government like Modiji has given at national level in Delhi. It’s upto the people to decide who they want in Delhi,” she said.

Kejriwal, too, held a 7-kilometer roadshow on Tuesday till Jantar Mantar, where he has often held his protests. He was supposed to file his nomination papers on Tuesday but stated that he got delayed due to the roadshow because of which he postponed the nomination process for Wednesday.

However, sources said that Kejriwal’s decision delay the nomination process was because he wanted to do it on the same day as Kiran Bedi, that is Wednesday.