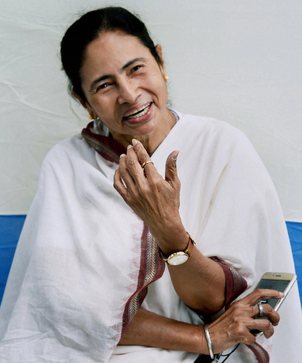 Amid bonhomie talk, Mamata to join Modi on Bangla trip

Posted By: govind ghimirePosted date: May 28, 2015in: Political NewsNo Comments

Kolkata, May 28 (PTI) Amid talk of bonhomie between the two, West Bengal Chief Minister Mamata Banerjee has decided to accompany Prime Minister Narendra Modi on his two-day visit to Bangladesh beginning June 6.

“The Chief Minister will go along with Prime Minister Narendra Modi to Bangladesh next month. We hope this visit will strenghten relations between the two Bengals (West Bengal and Bangladesh) and also between the two countries,” state’s Education and Parliamentary Affiars Minister Partha Chatterjee told PTI.

There was speculation in the media about whether the Chief Minister will accompany Modi on his first trip to Bangladesh after taking office.

Teesta water sharing issue is likely to come up for discussion during the visit. The Teesta deal was set to be inked during the then Prime Minister Manmohan Singh’s visit to Bangladesh in September 2011 but was postponed at the last minute due to objections by Mamata.

“Both the countries will give their approval to it very soon. We are hopeful that we will get full cooperation from West Bengal government”, Singh said.

Last week, Bangladesh had hoped that the pact will be inked during Modi’s trip.

The Teesta water is crucial for Bangladesh, especially in the leanest period from December to March when the water flow often temporarily comes down to less than 1,000 cusecs from 5,000 cusecs every year.

Asked if the Chief Minister had given her consent to the Teesta treaty, Partha Chatterjee said, “I am not aware of it and I cannot comment on this matter.