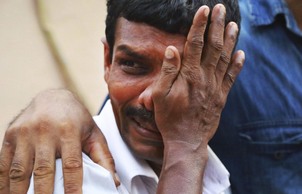 Thirteen persons, including members of the managing commitee of the Puttingal Devi Temple, were today arrested in connection with the fireworks mishap there in which 110 people have died, police said.

The arrested included seven members of the managing committee and six workers of the two contractors, who carried out the fireworks display on the final day of the seven-day long festival early Sunday.

The arrests were made by the police after day-long questioning, sources said.

Two other managing committee members Srendranathan Pillai and Murugesan were picked by police here this morning.

Other six workers of the two contractors who carried out the fireworks disply were also picked by police after the accident.

A Crime Branch probe into the fire tragedy is currently underway.

The ghastly mishap at the 100-year-old temple at nearby Parvavoor occurred when sparks from fireworks fell on a storehouse stocked with crackers, triggering powerful explosions.