BREAKING NEWS
10:39 AM
Home News Special Court convicts 12 for 2006 Mumbai blasts: All you need to know about the case 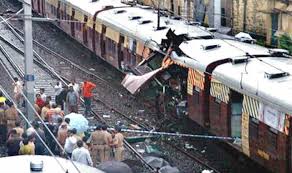 Special Court convicts 12 for 2006 Mumbai blasts: All you need to know about the case

Twelve persons have been convicted for their involvement in the 2006 serial blasts in Mumbai that killed over 180 persons. The trial has been on now for the last nine years.
While initial reports said five had been convicted, reports later said that 12 of the 13 accused have been convicted while one person has been acquitted.
The accused convicted by the court are: Faisal Shaikh, Ali Bashir Khan, Mohammad Ali, Majid Shafi, Sajid Ansari, Kamal Ansari, Ethesham Siddiqui, Zameer Shaikh, Sohail Shaikh, Muzammil Shaikh, Tanvir Ansari and Naved Hussain.
The accused were convicted under the stringent Maharashtra Control of Organised Crime Act (Mcoca), special public prosecutor Raja Thakre said.
Abdul Shaikh was the only accused to be acquitted by the court, reported CNN-IBN.
“Arguments on sentencing of the accused will take place on Monday,” Thakre said.
Here’s everything you need to know about the case:
The blasts
Seven blasts in crowded Mumbai local trains took place on the evening of 11 July 2006 in which a total of 189 persons were killed. Over 820 people were injured in the blasts.
The blasts took place at Mahim and Matunga in central Mumbai and at Khar, Bandra, Jogeshwari, Mira Road and Borivali in the northern suburbs. All the blasts took place on the Western Railways line of the city’s suburban rail network.
The blasts were allegedly engineered using a mixture of RDX and ammonium nitrate. The explosive mixture was allegedly packed into seven bags which were then placed in trains leaving from Churchgate in south Mumbai for the suburbs. The bombs were planted in the first class coaches of the trains.
AFP imageAFP image
The accused and the alleged plot
The Maharashtra Anti-Terrorism Squad had arrested 13 persons for their alleged involvement in the case. The police has said that the accused were linked with terror group Lashkar-e-Taiba and banned group Students Islamic Movement of India (SIMI).
They are: Faisal Shaikh, Ali Bashir Khan, Mohammad Ali, Majid Shafi, Sajid Ansari, Kamal Ansari, Ethesham Siddiqui, Zameer Shaikh, Sohail Shaikh, Muzammil Shaikh, Tanvir Ansari, Naved Hussain and Abdul Shaikh. One of the accused, said to be a Pakistani, allegedly died in the blasts.
The police has said that the bombs were assembled at Mohammed Ali’s house by the accused, along with Pakistani nationals.
Former Mumbai police commissioner AN Roy, at the time of filing of the chargesheet, had said that there were allegedly 14 people involved in the planting of the bombs.
“They were divided into seven teams, each consisting of a Pakistani national and an Indian national. We have arrested five out of the seven Indian nationals. One out of the seven Pakistanis died at the blast site, while we have asked for the other six who are reportedly hiding in Pakistan to be externed,” Roy was quoted as saying in a Mumbai Mirror report.
All 13 have been charged under sections of the Maharashtra Control of Organised Crime Act (MCOCA), Indian Penal Code, Unlawful Activities Prevention Act, Explosives Act, Railway Act, Passport Act and Prevention of Damage to Public Property Act. They face a maximum punishment of the death penalty.
The 13 accused have been in prison for seven years already as the trial against them has proceeded.
The police has also named 15 others in the chargesheet in which Lashkar-e-Taiba’s Pakistan-based leader Azeem Cheema has been named as the prime conspirator.
Trial so far
The verdict is set to come a year after special judge YD Shinde concluded the trial. At the time he had declared that the judgement could be announced on 19 September, 2014.
The prosecuting agency, state Anti Terrorism Squad (ATS), had examined 200 witnesses in the case against 13 accused, while the defence lawyers examined a total of 40 witnesses.
The ATS has filed a chargesheet that runs into over 10,000 pages.
Special public prosecutor Raja Thakare, who appeared for the ATS in this case, said the court must be ensuring that all the evidence and arguments of both the prosecution and defence is covered in the judgment and there are no loose ends.
“During the trial, we (prosecution and defence lawyers) submit a lot of evidence and judgments in support of our arguments. All that has to be perused and considered by the judge before passing judgment. It is a huge task,” Thakare told PTI.
The controversies
The pressure cooker factor: The first controversy in the trial came thanks to a statement made well the chargesheet was filed. When announcing the arrests in the case in 2006, former police commissioner AN Roy had said that the bombs used in the blasts were packed into pressure cookers which were then planted on the trains.
However, the pressure cooker theory was later found missing in the chargesheet in the case. The police justified its absence saying that they had mentioned “household items” in the chargesheet. But at the end of the trial, the special public prosecutor told the court that pressure cookers “could have been used”. This, despite the fact, that none of shopkeepers from where the cookers were allegedly bought were examined by the prosecution during the trial.
Torture: The accused in the case have accused the police of torture in order to extract confessions. Confessions are admissible as evidence under Mcoca. Two of the accused filed an application before the court accusing the police of torture. Media outlet Gulail had released interviews with some of the accused using hidden cameras in which the Mumbai Police was accused of torture. Here’s the video:

The police has argued that the claim of torture is part of the Al-Qaeda manual on terrorism and the accused are merely following it.
The Indian Mujahideen factor: In 2008 the Mumbai police claimed to have confessions from three members of terror group Indian Mujahideen, who said they had carried out the blasts. Sadiq Shaikh, Arif Shaikh and Mohammed Saif claimed that the explosives had been procured by Indian Mujahideen chief Riyaz Bhatkal. The bombs were allegedly assembled at a house in Sewri before they were placed on trains.
Bhatkal, who was later arrested, claimed that the blasts were carried out by the group to avenge the 2002 Gujarat riots. Bhatkal allegedly claimed that explosives were brought in from Karachi, which was smuggled into India. It was then allegedly taken to Azamgarh and transported to Mumbai by two persons where the bombs were assembled. The ATS, however, stuck to its stand on the 13 accused and has not included the alleged Indian Mujahideen as accused in the case.
The call data records: The accused have claimed call data records for many of them punch holes in the police theory about the blasts. The defence has shown call data records to indicate that four of the accused were nowhere near where the police has claimed they were.