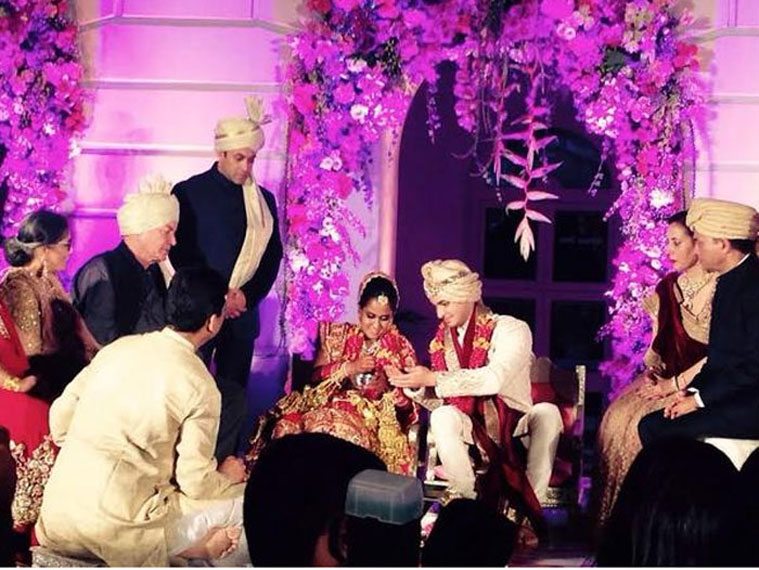 Salman Khan’s sister Arpita Khan and Aayush Sharma’s wedding preparations have been making headlines recently. And now they are finally married. They have taken their vows and exchanged garlands in a typical Hindu Punjabi ritual.

Arpita Khan and Aayush Sharma got married at the Falaknuma Palace in Hyderabad last night, November 18. Few pictures of the bride and groom have been tweeted from the venue. Arpita can be seen dressed in a heavily embroidered red lehenga and Aayush in white sherwani and sehra. Arpita has dressed up completely like a Hindu Punjabi bride. She had worn choodas and kale’s, a typical Punjabi bride.

Salman Khan and his family were dressed in black and had sported a golden pagdi. The baraat was received by Salman’s father Salim Khan, mother Salma and brothers Sohail and Arbaaz. A jaimala and pheras also took place.

The celebrations, which kicked off with the ‘baraat’ at 4.30 p.m., continued till late in the night at the heritage hotel located in the old city area.

Aamir Khan, Katrina Kaif and Karan Johar were among top stars from Bollywood who attended the marriage. It was not clear as to which other leading stars attended the wedding as the security was very tight.

Ahead of the wedding, Arpita’s sisters-in-law Malaika Arora Khan and Seema Khan, close friend and Malaika’s sister Amrita Arora, and family friend Deanne Panday were photographed in their wedding outfits.

Aayush and Arpita’s reception is expected to take place in Mumbai on November 21.