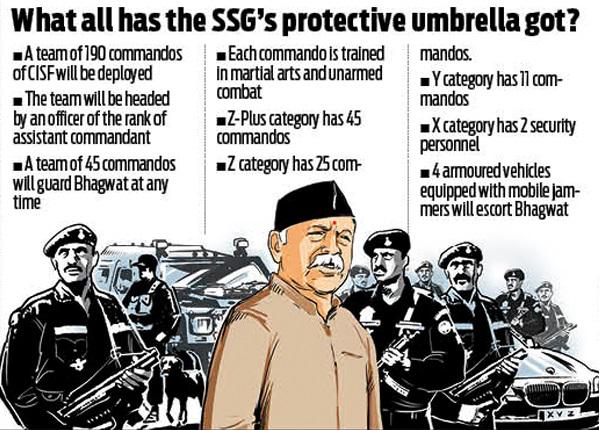 The elaborate security cover means that Bhagwat will enjoy a level of security next only to those of the Prime Minister and the President.

It would also make Bhagwat the only non-constitutional and non-political figure to be protected with such a security blanket.

Following heightened security threats to Bhagwat, the Union home ministry had ordered the CISF to take over the responsibility of protecting him, said a source.

In 2006, the Lashkar-e-Toiba (LeT) had made a failed attempt to attack the RSS headquarters in Nagpur. A review done by security agencies indicate that Bhagwat is also on the hit list of many terror outfits, said a police officer.

So far, the Maharashtra police and the State Reserve Police Force (SRPF) were providing round-the-clock security to Bhagwat and the RSS headquarters in Nagpur. However, from June 10, the CISF will take over the entire security detail, said the source.

The 190-member-strong team will be permanently stationed in Nagpur. An officer of the rank of Assistant Commandant will head the team and will be assisted by six other officers. All others in the team will be specially trained commandos.

These commandos will be drawn from SSG, which is trained on the same level as the black cat commandos of the National Security Guard (NSG).

According to sources, these commandos are military-trained and are experts in dealing with the most sophisticated weapons. They are also trained in martial arts and unarmed combat.

The commandos will be armed with MP5 and AK-47 rifles. They will also carry Glock pistols.

A team of 45 commandos will escort and guard Bhagwat round-the-clock and whenever he is travelling. There will also be a custom-built BMW, which will be bullet-proof and bomb-proof, and equipped with mobile jammers. His entourage will include four SUVs, which will carry armed commandos and state-of-the-art surveillance and security equipment.

When Bhagwat is scheduled to travel outside Nagpur, a team of 20-22 personnel will first travel to the destination a couple of days ahead and take over security. The team will sanitise the entire area and secure it. When Bhagwat reaches the destination, the commandos will escort and guard him till he returns.

CISF is a premier paramilitary force in the country. It has been entrusted with the duty to secure and guard some of the most vital installations in the country, including airports, seaports, Delhi Metro, government buildings, heritage structures like the Taj Mahal and nuclear power plants. It also guards about 40 high-risk individuals.