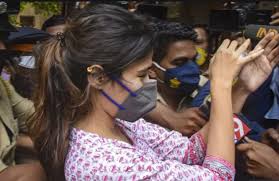 The Narcotics Control Bureau (NCB) on Tuesday arrested Rhea Chakraborty after questioning her for three days in connection with drugs-related allegations in her boyfriend and actor Sushant Singh Rajput’s death case.

“Rhea has been arrested and due process of informing the family has been completed,” said deputy director of NCB, KPS Malhotra.

She was taken to a public hospital here for medical check-up and COVID-19 tests soon after her arrest.

Rajput, 34, was found dead at his Bandra apartment here on June 14.

Before entering the vehicle along with NCB officials, Rhea waved at the assembled media persons at the anti-drug agency’s office in south Mumbai.

Clad in black, Rhea reached the NCB office at Ballard Estate around 10.30 am on Tuesday and was also seen carrying a bag with her, while entering the office.

The 28-year-old girlfriend of Sushant Singh Rajput had in recent TV interviews denied that she consumed drugs.

Rhea was recently interrogated by the CBI probe team, camping at the DRDO guest house in Mumbai’s western suburb Santacruz and also questioned by the Enforcement Directorate in connection with a money laundering case.

Sushant Singh Rajput’s father had filed an FIR against Rhea Chakraborty in Patna, accusing her of driving his son to suicide and misappropriating his money.

Rhea has denied the allegations on several occasions.