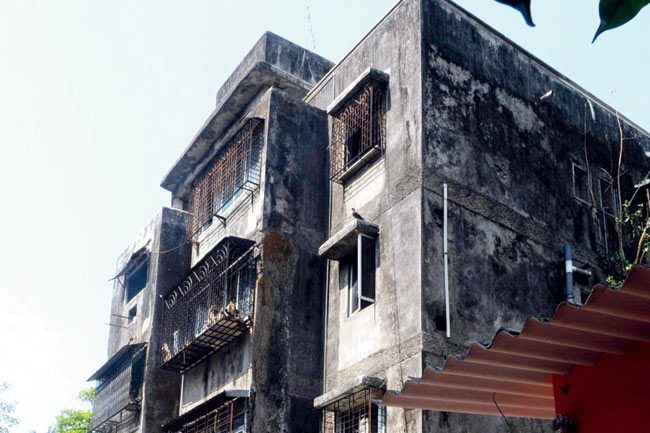 The residents of Bogada Chawl who have evicted by the BMC from their century old dilapidated building are yet to get alternative accommodation to be given by BMC.

Everyday a group of women and children sit on a protest at the entrance of the building which is of36,000 sq meterst at a prime location just next to Tata Memorial hospital.

The housing society of Bogada Chaw,l Baman Deo Cooperative Housing Society formed by Bogada Chawl tenants had passed a resolution to cancel the agreement with the present Builder Spee Relators which was duly informed and approved by BMC. According to documents provided by Baman Deo Cooperative housing Society the builder does not at all have the financial capacity to develop the building. They have paper evidence showing that the Spee Realtors who had taken a personal loan of a few lakhs of rupees has not been able to pay monthly installments to the bank. Such a builder who has taken such a small amount of loan and who cannot pay the interest by no means could build a structure of 36,000 sq meters says Chandra Shekhar secretary of Baman Deo Housing Society .

They want a builder who has a sound financial background be appointed their builder. They have in fact with the consent of the majority of the members selected Shayog Homes as their builder.

Therefore they have with majority of the housing society passed a resolution to terminate the agreement with Speed Realtors and Letter of Intent be revoked.

In spite of this request BMC went ahead and asked the developers Speed Realtors’ to provide them with alternative accommodation and using police force of about 250 -300 personnel’s made them vacate the building. The tenants demand for immediate proper alternate housing.