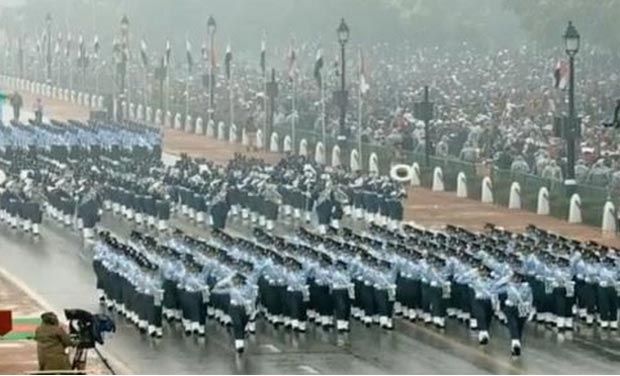 NEW DELHI: Multi-hued images of India’s rich cultural diversity and military might as well as achievements in diverse fields unfolded on Monday at the 66th Republic Day parade which had a US President — Barack Obama — as the chief guest for the first time.

Obama’s attendance at the Republic Day celebrations was unlike any other event he has participated in during his overseas travel as president. He spent more than two hours on an outdoor viewing platform, an unusual amount of time given Secret Service security concerns. Obama nodded in approval as tanks and rocket launchers, some of them Russian-made, rolled down the parade route and helicopters ferrying Indian flags flew overhead.

Obama was seated next to Modi, donning a multicoloured ‘bandhej safa'(turban), as the two leaders chatted and enjoyed the annual spectacle. A smiling US President was seen nodding in appreciation on several occasions.

As the nearly two-hour-long parade, showcasing the country’s ‘unity in diversity’ marched down the Rajpath in drizzle and overcast skies, thousands of spectators gathered along the route and cheered in joy.

The national capital was wrapped in unprecedented security blanket as thousands of security personnel kept a hawk’s vigil in and around the Rajpath area.

In a departure from tradition for the chief guest at the Republic Day parade, Obama arrived in his own highly-secured bomb-proof vehicle, ‘the Beast,’ at Rajpath.

A highlight of this year’s parade was the display for the first time of the recently acquired long-range maritime surveillance and anti-submarine P-8I aircraft and the long-range advanced MiG-29K fighter plane.

The synchronised military and police contingents led by General Officer Commanding (Delhi), Lt General Subroto Mitra marched proudly to the lilting tunes of bands through Rajpath where President and Supreme Commander of the Armed Forces Pranab Mukherjee took the salute from a specially erected dais.

A massive ground-to-air security apparatus was put in place in the national capital turning the city into virtually an impregnable fortress. Snipers of National Security Guard were deployed at all high-rises along the parade route.

The arrangements were made to ensure an incident-free Republic Day celebrations and foolproof security to the American President, who arrived here on Sunday.

As part of the seven-layered security, around 45,000 security personnel were deployed across the city while the commandos of the Indo-Tibetan Border Police and Delhi Police kept a hawk-eye vigil at important locations.

The unfurling of the tricolour by the President and playing of the national anthem were followed by a customary 21-gun salute.

The parade began shortly after Mukherjee and Obama arrived at the saluting base separately at the ceremonial boulevard—Rajpath. Traditionally, the President accompanies the chief guest in his limousine.

Before the commencement of the parade, Naik Neeraj Kumar Singh and Major Mukund Varadarajan were posthumously conferred the highest peacetime gallantry award Ashok Chakra by the President.

Major Varadarajan and Naik Neeraj Kumar laid down their lives while battling groups of militants in separate operations in Shopian and Kupwara districts of Kashmir respectively.

Among the main attractions of the ceremonial parade were 25 colourful tableaux representing India’s cultural and linguistic diversity as also signifying the vision of the future India as envisaged by the current dispensation.

So, a massive mechanised lion made out of gear-tooth wheels, symbolic of the government’s ‘Make in India’ policy or a mock-up of a high-speed bullet train drew cheers from the crowd as they rolled down the majestic avenue.

Besides, the tableaux for ‘Prime Minister Jan Dhan Yojana’ helmed by the department of financial services, the ministry of women and Child Development-led exhibit featuring live performances by women themed on ‘Beti Bachaho, Beti Padhao’ campaign also won many hearts.

And, with “women’s empowerment” being the theme of this year’s Republic Day parade, another attraction at the annual extravaganza was the contingents of all-women officers of the three Services marching for the first time on the Rajpath.

While 16 of the tableaux belonging to the states and the union territories represented the cultural and architectural wealth of the country, the remaining nine were from various central ministries and departments themed on ‘Ma Ganga’ to ‘Yoga’ among others.

Colurful performances by schoolchildren delighted President Obama as much as the crowd in general.

Another military attraction was the display of Army version of indigenously developed surface-to-air Akash medium range missile and Weapon Locating Radar, both by Defence Research and Development Organisation (DRDO).

An Indian Air Force tableau with the theme “50 years of 1965 War” was next in line at the majestic Rajpath, dazzling VIPs, VVIPs and spectators alike.

In keeping with the Indian Navy’s theme “Ensuring Safe Seas for a Resurgent Nation” – the Naval Tableau displayed a few of its frontline assets in all four dimensions of maritime warfare.

Navy’s march to self-reliance and indigenisation was showcased by the models of indigenously constructed destroyer INS Kolkata launching a BrahMos missile with the Advanced Light Helicopter “Dhruv” in the background.

The second Naval tableau, titled “Bharatiya Nau Sena aur Nari Shakti”, represented the four Indian Navy women officers who braved vagaries of the seas and participated in an ocean voyage from Goa to Rio-de-Janeiro in Brazil on board Indian Naval Sailing Vessel ‘Mhadei’.

The camel-mounted band of BSF and the ex-servicemen marching contingent too added to the attraction.

Among the state’s tableau, Gujarat and Karnakaka had particular appeal.

While the home state of Prime Minister Modi showcased the ambitious project of building the ‘Statue of Unity’ symbolically represented by that of Sardar Vallabhahi Patel and the Sardar Sarovar Yojana, the southern state charmed everyone especially the kids with its tableau, huge scale-model, fashioned on the famed wooden toys of Channapatna, located in the outskirts of Bengaluru.

For Jammu and Kashmir, the dazzling beauty of the region was displayed through Rouff dance of Kashmir, flower dance of Ladakh and Kud dance of Jammu regions.

Haryana made its presence through its Sultanpur Bird Sanctuary, famous for hosting migratory birds coming from Europe, Siberia and central Asia.

Besides, CPWD which made a special floral tableau last year showcasing the Rajpath from India Gate to Raisina Hill this year chose the theme of ‘Maa Ganga’, depicting her origin from Gaumukh.

Ministry of law and justice brought out a huge replica of the Indian Constitution as part of its display while ministry of AYUSH, showcased Yoga, Ayurveda, Unani and other traditional medicinal systems of India.

Uttarakhand showcased the Kedarnath Temple, Jharkhand its terracotta temples in Maluti, Sikkim its cardamom cultivation and Arunachal Pradesh the Igu dance, dance of the Idu Mishmi tribe and Chhattisgarh the Dussehra festival of Bastar.

Uttar Pradesh presented the culture of the Awadh region through its tableau themed around one of its most secular rulers Nawab Wajid Ali Shah.

Also, 20 young brave hearts who won the national bravery awards drove through the Rajpath in gypsies.

A total of 13 Army bands, one band each of Air Force and Navy, eight band of paramilitary forces including Camel-mounted band of BSF and one band each of NCC boys and girls played martial music for the parade.

One of the most breathtaking event was the manoeuvres by air force jets and daredevil motorcycle performance ‘Jaanbaaz’ by BSF personnel.

The grand finale of the parade was a spectacular flypast by the IAF jets and aircraft.

Next five Jaguars flew in Arrowhead formation and the five MiG-29 fighters, called the ‘Tridents’, flew in ‘Fulcrum’ style.

Three Sukhoi (Su-30 MkI) fighter jets then made the “Trishul” formation by flying over the Rajpath, and once in front of the saluting dais, the three aircraft split upwards, making a ‘Trishul’ in the sky.

The flypast concluded with another Su-30 MkI carrying out a “Vertical Charlie” manoeuvre over the saluting dais.