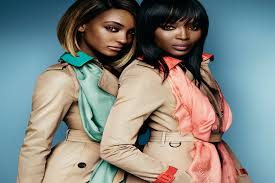 In an uncertain world, there are some things you can always count on with a Burberry campaign. Think iconic and of-the-moment models; the coolest new musicians; a dose of Brit whimsy and Christopher Bailey’s take on the house’s classics.
For SS’15, they hit all the right notes. Last season’s campaign saw a cheeky response to Britain’s obsession with tabloids— forever young phoenix Kate Moss shared a trench coat under the rain with Britain’s whimsical Cara Delevingne (who somehow managed to keep a straight face). This time around, Mario Testino brought a fresh, crisp balance of colours to echo Bailey’s nostalgic summer mood, setting the tone for an English summer romance.
Sticking with their success formula, the label chose another model duo for its campaign version 2.0: veteran Naomi Campbell with the very fiery Jourdan Dunn. Musicians George Barnett (who plays the drums for These New Puritans, and the face of Burberry Brit Rhythm for men), and George Le Page, the drummer for Of Empires, join the models in the campaign.
The SS’15 collection entitled ‘Birds and the Bees’ also included cover text from Bruce Chatwin’s novels. James Bay’s ‘Scars’ was the soundtrack for the show and the campaign. Softly pleated pastel tulle dresses; iridescent sequins and watercolor botanics dominated the runway. Moulded denim jackets and pristine white sneakers kept us in check from getting lost in daydreams.
And of course, the iconic trench gets prime focus. It wouldn’t be a Burberry campaign without it.