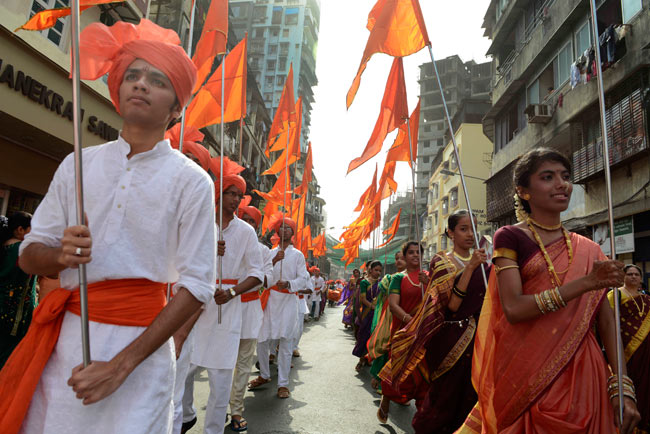 Gudi Padwa, the first day of the Hindu calendar was observed with great fervour in the city. Maharashtrians started
the day with Gudi puja and prabhat feri or shovayatra to mark the beginning of the New Year.

This year’s biggest Gudi padwa sovayatra has been organized in Belapur by Nava Barsa Sovayatra Manch. As many as 100 women will take part in the bike rally wearing Nauwari. The preparation will begin from Friday when homemakers will gather on the road to draw rangolis. The rally will kick off at 8am from Kalimata mandir at sector 8B and conclude at Albela Hanuman temple at 9.30am. During the course, school children will perform lazim drill and aerobics. Women will also display traditional Marathi ‘khel’or sports like Phugree and Jeemma.

Ashish Selar in his brief speech marked the day as a happy occasion for Hindus. He further stated that the youth should be cultured, disciplined and have have loyalty towards the country. Selar announced the ban of beef in Maharshtra as a great achievement and effort of RSS, BJP, Bajrang Dal and VHP.

According to Mahesh Achraya an executive of the RSS said the rally was peaceful which was well participated by the local people. He said a Bhandara was organized in the night were than thousand people ate in delight.