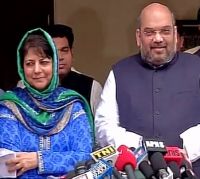 New Delhi: Condemning the recent terror attacks in Jammu and Kashmir, Chief Minister Mufti Mohammad Sayeed on Sunday said that it is a conspiracy to derail the peace process in the state

Sayeed further that Pakistan must control terrorism if it wants peace and reconciliation.

“The peace that was witnessed by the state after 2003, similar peace will return to Jammu and Kashmir, same peace will be restored and the forces which are doing this (such attacks) that we should send a message from the House …Pakistan is also a victim and their Prime Minister says he cannot do anything to control this,” he said.

He said during the tenure of former Pakistan President Pervez Musharraf “peace prevailed” on both sides of the border and Line of Control.

The Chief Minister again termed the terrorists from across the border as “non-state actors” and asked, “Who were the people who attacked churches in Karachi, who launched attacks in Peshawar, who is Lakhvi.”

The Assembly Session of the Jammu and Kashmir Assembly today witnessed an uproar over the attacks by militants in the state.

The functioning of the House was disrupted after Bharatiya Janata Party leaders raised anti-Pakistan slogans in the Assembly.

Two attacks by the militants have taken place in the last two days in Jammu and Kashmir.

Security forces gunned down two guerrillas during an attack on Army camp in Jammu and Kashmir’s Samba district yesterday.

On Friday, guerrillas had attacked the Rajbagh police station in Kathua district. Six people including two terrorists, two paramilitary troopers, a policeman and a civilian were killed.