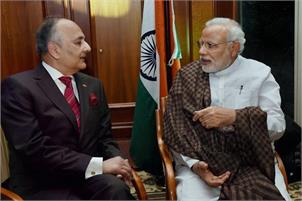 Government sets up panel to consider declassification of Netaji files

An inter-ministerial committee, headed by Cabinet Secretary Ajit Seth, has been set up by the government to look at the possibility of declassification of all files related to death or disappearance of Netaji Subhash Chandra Bose nearly 70 years back.

The first meeting of panel, which consists of representatives of the Ministries of Home and External Affairs, RAW, and Intelligence Bureau, is likely to take place tomorrow, official sources said on Wednesday.

The NDA government’s move came amidst growing demands for declassification of nearly 90 files which are yet to be made public. Interestingly, grandnephew of Bose, Surya Kumar Bose, had met Prime Minister Narendra Modi in Berlin on Tuesday and requested him to declassify all files related to events since his death or disappearance in Taiwan on August 18, 1945.

The issue of Netaji related files came to the fore last week when a controversy broke out following reports that his family was kept under surveillance by the Intelligence Bureau for 20 years, much of it during the tenure of Prime Minister Jawaharlal Nehru.

Sources said among nearly 90 classified files relating to Bose, around 27 are with the Ministry of External Affairs while rest with the Prime Minister’s Office.

There is no file related to the freedom fighter with the Home Ministry as all have already been declassified and handed over to the National Archives.

The committee will examine whether the declassification of the files will in anyway hamper India’s relations with some foreign countries and also review certain provisions of the Official Secret Act, sources said.