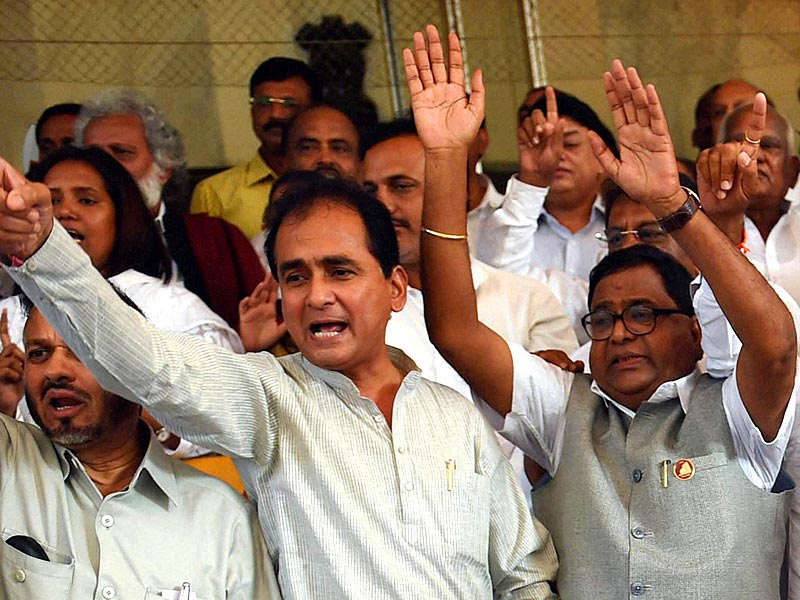 In an apparent attempt to cosy up with Congress, the Shiv Sena has cautioned the Maharashtra BJP government against preparing to win the next trust vote by suspending Congress legislators.

The Devendra Fadnavis government had on Wednesday won a contentious trust vote in the state Assembly amid dramatic protests by the Opposition. Later, five Congress MLAs were suspended for allegedly causing “injury” to Governor C Vidyasagar Rao when they tried to block his entry into the legislature complex.

“Running the government is not a child’s play. Even if you get power in your hand, you cannot suspend MLAs and (by doing this) prepare to win the next trust vote after six months. If you are trying to cheat people by doing this, remember you are digging your own grave,” the Sena said today in an editorial in its mouthpiece ‘Saamana’.

“It has been alleged that some people tried to heckle the Governor following which he got injured. It is surprising that inspite of being injured he could walk in and give a long speech. We could not see any sign of injuries on him that day. Inspite of this, five Congress MLAs were suspended on false charges,” it alleged.

Taking a jibe at its former ally, the Sena said since the Governor is a BJP leader from Telangana, only leaders from that party would be able to gauge the extent of his injury.

The editorial said that though the BJP government managed to win the trust vote in the Assembly, it lost the people’s trust.

“All newspaper headlines are showing that the BJP has won the trust vote, but lost people’s trust. They (the BJP) have lost every moral right to govern now,” it said.

“Whoever fails to follow the constitutional rules will get a severe beating from the people. By trampling upon all the rules and regulations and traditions of the state to claim stake to the government, they have earned the wrath of the people. People have watched the shameful act committed by the BJP,” the Sena added