BREAKING NEWS
01:59 AM
Home News Delhi Seminar for Gorkhaland and the demand of small states concluded 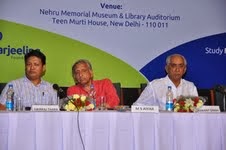 Delhi Seminar for Gorkhaland and the demand of small states concluded

Senior Congress leader and former union minister Mani Shankar Aiyar today said the Centre as well as the West Bengal government must reach out to Indian Gorkhas and the Gorkha Jana Mukti Morcha to resolve the problem in Darjeeling hills.
Former union home secretary RK Singh also endorsed the option of a union territory for Darjeeling hills, supporting the proposition suggested by senior journalist Swaraj Thapa that a centrally administered model in the form of a union territory may be a permanent solution to the issue.
“I agree that a union territory can be considered for Darjeeling provided that the West Bengal government is agreeable to the idea,” he said speaking at a seminar organized by the Darjeeling Foundation, a Delhi based think tank promoting the cause of separate state of Gorkhaland. The foundation has been initiated by Swaraj Thapa and a few other like minded individuals in Delhi. Criticizing the Trinamool Congress for its unyielding attitude , Aiyer said he was its founding member but quit within three months after realizing that Mamata Banerjee was not democratic in her approach .

Senior BJP leader and Darjeeling MP Jaswant Singh also supported the idea of a union territory, recalling that the sacrifice of Gorkhas towards the nation is commendable.
Speaking in the seminar, Gorkha Jana Mukti Morcha spokesperson and Kalimpong MLA Harka Bahadur Chettri maintained that the Gorkhaland Territorial Administration was only a temporary arrangement and the GJM was committed to the issue of Gorkhaland.
Telengana Rashtra Samiti leader and former MP B Vinod Kumar said that the demand for Gorkhaland was being misrepresented in the national media in general and in the Telegu media in particular. “The media is very biased and it has tried to project it as if creation of Gorkhaland will lead to disintegration of India. This is wrong. You must counter it effectively” he said and added that more states were necessary for the country if development was to reach to all segments of the people. He also contended that national integrity would be strengthened if more states were formed.
Addressing a packed audience at the Teen Murti Auditorium here in Delhi, the speakers acknowledged the contribution and role of Indian Gorkhas in the development of the country and said that they would have to be given their due. Mani Shankar Aiyar specifically recalled his association with former Prime Minister Rajiv Gandhi and said that as an OSD in the then Prime Minister’s Office, he had been assigned to organize the (infamous) public rally in Darjeeling in 1986 which was boycotted by the then GNLF. Disregarding the advise of the PMO and state Congress leadership, Rajiv Gandhi went ahead with the rally and addressed just a handful of policemen and Congress workers at the St Joseph’s grounds for over an hour. “Later while I was travelling back with Rajivji in the car, I asked him what possessed him to agree to such an embarrassment and address empty stands. Rajivji told me that people may not have come to see him but they were hearing every part of what I said. ” Mani Shankar Aiyar said. In other words, Rajiv Gandhi wanted to reach out to the Indian Gorkhas notwithstanding the fact that they had boycotted him. And the results paid when two years later an accord was signed with the GNLF leading to the creation of the Darjeeling Gorkha Hill Council.
“We need to help Indian Gorkhas rather than alienate them. An answer has to be found” he said.

Aiyar also gave a historical perspective to the DGHC accord, saying that much of the autonomy proposals and devolution of powers through the DGHC was actually drawn from the Sri Lanka accord. “At that same time, Rajiv Gandhi was tackling the Sri Lanka problem. We in the PMO had to devise proposals that were aimed at devolution of powers in the Sri Lanka provinces, especially to the provinces in the Tamil majority Southern part of Sri Lanka. Much of the DGHC proposals were modeled along the same lines as the Sri Lanka devolution of powers proposal” he said. Supporting the concept of smaller states, he said that they were easier to administer.
Former union home secretary RK Singh conceded that he had earlier opposed statehood for Gorkhaland as well as Telengana on the ground that it would lead to more such demands elsewhere. However, after listening to the participants like Swaraj Thapa and Harka Bahadur Chettri, he said that he was convinced that there is considerable merit in their arguments. He admitted that the region had been neglected for long and development was negligible in the Darjeeling hills.
Darjeeling MP Jaswant Singh underlined the need to narrow down differences in the perception on Gorkhaland between the Indian Gorkhas and the Centre and the state government.

Ranjan Sharma , Media Coordinator has in a press report stated that the response of the guests was positive and they supported the idea of creation of a state of Gorkhaland. We shall frequently organize such events in future and support our cause . After all we are not asking anything out of the box and it is a constitutional demand which should be treated at par with Telangana.

The seminar, organized by the Darjeeling Foundation was held at Nehru Memorial Museum and Library Auditorium, Teen Murti House.