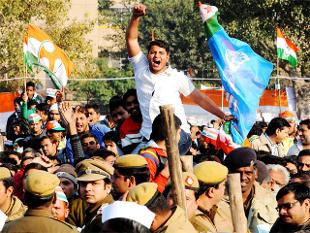 New Delhi: With an aim to encourage people to vote in February 7 Delhi polls, the Election Commission will carry out an awareness campaign targeting commuters in Metro stations and buses of Delhi Transport Corporation (DTC).

Delhi Chief Electoral Officer (CEO)’s office will launch a campaign at all DMRC stations and trains as well as DTC’s buses across the national capital on Saturday.

“In Metro and DTC buses, lakhs of people travel daily and this is one of the best modes to reach out to voters. At Metro stations, an appeal will be made to people through public announcement system to cast their voters.”

“Besides, we will also encourage passengers travelling in trains by displaying ‘Delhi Votes’ on LCD screens installed inside the Metro,” CEO Chandra Bhushan Kumar told a news agency.

Apart from DMRC stations and trains, a campaign will also be run in DTC buses, aiming at increasing voter turnout, he said.

“We will also appeal to people travelling in DTC buses by displaying ‘Delhi Votes’ on LCD screens installed inside the buses,” Bhushan also said.

In the 2014 Lok Sabha election, Delhi had recorded around 64 percent polling in the battle for seven seats while in the 2013 Assembly poll, the national capital had recorded over 66 percent voting.

In the capital, over 1.33 crore voters are eligible to exercises their franchise in the February 7 election while a total of 11,763 polling stations will be set up for the exercise.

The Delhi CEO office has also roped in wrestler Sushil Kumar to encourage people, especially youths, to cast their votes in the upcoming Assembly Election.

According to the Commission, around one lakh government employees will be involved in the conduct of the poll.