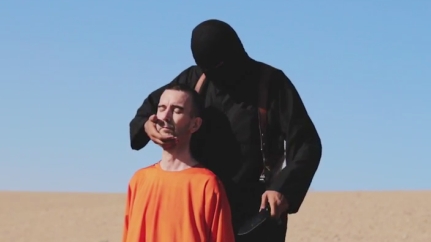 On Saturday night, footage showing the beheading of the British hostage David Haines was released by the Islamic State (Isis) – shortly after his family had appealed for the group to contact them to discuss his release The video shows Mr Haines, who was captured by militants in Syria in 2013, wearing an orange jumpsuit and kneeling in the desert while he reads a pre-prepared script. It later shows what appears to be the aid worker’s body.
On Sunday, the British Prime Minister described Mr Haines as a “British hero”, and praised the “extraordinary courage” of his family. He said the UK would “hunt down those responsible and bring them to justice, no matter how long it takes”, adding: “They are not Muslims, they are monsters.”
As with previous videos showing the beheading of US journalists James Foley and Steven Sotloff by Isis, it ends with a threat to kill another hostage – a second British national, who was today named as .
Having returned to Downing Street to chair a meeting of the Government’s emergency committee Cobra, Mr Cameron insisted that the latest killing would not change Britain’s strategy against Isis.
Speaking from Downing Street this morning, the Prime Minister said that “we have to confront this menace”, Mr Cameron added that this will not involve direct British involvement in fighting. The UK is instead playing a supporting role to the US, providing transport and supplies.
David Cameron said he would track down the killer of David Haines “We cannot just walk on by if we are to keep this country safe,” he said. “Step by step, we must drive back, dismantle and ultimately destroy Isil and what it stands for.”
The video begins with footage of David Cameron talking about using the UK’s “military prowess” to put pressure on the Islamic State – which he describes as an “appalling organisation”.
It then cuts away to show Mr Haines kneeling next to a man who experts say appears to be the same militant who featured in the videos showing the deaths of Foley and Sotloff.
In his speech, which seems to have been made under duress, the hostage says: “My name is David Cawthorne Haines. I would like to declare that I hold you, David Cameron, entirely responsible for my execution.
“You entered voluntarily into a coalition with the United States against the Islamic State, just as your predecessor Tony Blair did, following a trend amongst our British Prime Minsters who can’t find the courage to say no to the Americans.
“Unfortunately it is we the British public that in the end will pay the price for our Parliament’s selfish decisions.”
David Cameron has vowed to ‘hunt down’ David Haines’ killers The Isis militant then speaks, and at one point mentions the bombing of the Haditha Dam by the US, an incident that only occurred in the past week, showing that the killing was carried out very recently.
He also addresses Mr Cameron directly, saying the Prime Minister will “pay the price for [his] promise to arm the Peshmerga (Kurdish military) against the Islamic State”.
The militant finishes speaking and goes to hold a knife to Mr Haines’ throat, before the video cuts away to show what appears to be his body.